This cocktail was first created for the Boston Park Plaza Hotel.  The Historic Park Plaza was originally called the Statler Hotel when it first opened its doors in 1927 and the Statler Lounge in the hotel pays tribute to that history.  New England has a long history with rum.  At it’s peak in 1770,  New England boasted 159 distilleries.  This cocktail  was inspired by Christine D’Abrosca’s St Astor, from Smugglers Grove in San Francisco. 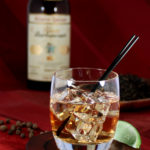