Tea by Any Other Name Would Taste As Sweet

These delicate rose varieties were originally named because their fragrance resembled tea.

In Romeo & Juliet Shakespeare argues in Juliet’s prose that it does not matter that Romeo is from the rival house of Montague, “What’s in a name? That which we call a rose by any other name would smell as sweet,” she says, implying that his family name will not influence her love.

And so it is with tea lovers. The extraordinary variety of tea, from every land, in many styles, is a gift. The healthful benefits of tea are not bound by geography, altitude, or terrain. Teas from the dense forest-covered mountains and deep valley thrive for all to enjoy.

Or skip to the category of your choice:

Tea Journey‘s Janis Hashe shares her discoveries in several gift categories from traditional to this unusual tea liqueur she discovered:

“You knew this had to be out there, right?” observes Janis. And sure enough, from Poland’s Tatra Mountains, comes a tea-based herbal liqueur, Tatratea. Grain alcohol is blended with black tea, herbs, and fruit extracts to create what might just be your sweetheart’s new favorite cocktail ingredient. | $29.99 | tatratea.com 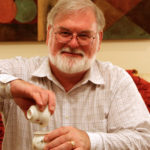 by Jokai Fearless Tea - 2 months ago

> Tea in the Great Outdoors