She Rises with the Sun to Pluck Tea Each Day

It is early morning and Purnima Rai carries a basket filled with tender tea leaves and fine buds. She will collect leaves all morning and then walk two hours to the processing unit in Sunderpani, Illam. The path underfoot is sloped and sloppy and steep but her manner remains charming day after day, and the smile she carries brings a smile to the faces of those she passes along the way.

Like smallholders around the world, Purnima toils hard in the field to harvest quality tea leaves on small plots of land. Seventy percent of the world’s tea is grown this way by hundreds of thousands of families in Africa and Indonesia, India and China.1

Purnima was born in 1950, the year Nepal’s 100-year Rana dynasty ended and Democratic rule began. She is a Nepali mother who struggles to maintain her garden and produce quality tea in spite of the limitations of old age, and cultural and social boundaries. As Democracy is a boon for Nepal, Purnima is a boon for Nepali tea.

She lives outside Sunderpani, a small, beautiful and breathtaking village lying at 5,498 feet (1,676 meters) above sea level. It is gifted with beautiful scenery, tea gardens and forests. This area is also blessed with fresh, cool air from Mt. Kanchenjunga – the third highest mountain in the world.

In her younger days, women were deprived of education and limited within the four walls of their homes. Society under the Shah monarchy was male dominated. Her parents and society as a whole compelled young women to marry at an early age and sent them to their husband’s house. Girls at that time give up their dreams and essentially regarded their husbands as a “god.”

Purnima married at 13 years. She didn’t get opportunity to know what school really means. The small tea garden that belonged to her husband became the only school for her, where she learned plucking, pruning of tea bushes, and how to hand-make tea for family consumption.

She nurtured the tea bushes like her own children and also served her family-in-laws kindly. Purnima became pregnant with her first child at the age of 16. Despite pain during her pregnancy the duties of raising an infant, she managed to care for the tea bushes. In time, she became a proud mother of two daughters and two sons. These sons are now the heir of the tea field and they also help their mother to look after the tea bushes.

Purnima has often said: “Where there is tea, there is hope.”

While she spent many years happily with her husband and children tragedy took away this happiness and she became a young widow. She shouldered the responsibility of bringing up her children on her own after her husband passed away. The sudden loss left her in tragic shock. In remote areas in Nepal, where people are not educated, widows are discriminated against by society.

Hesitant to remarry, she struggled on her own to cope with such problems, standing with dignity like Mt. Everest. For a married woman in Nepalese culture, happiness is a synonym to her husband. However, Purnima didn’t lose her hope and found happiness on her own tea garden.

With the keen interest and passion for tea, she extended her tea field to an area of about 3.7 acres (1.5 hectares). The garden now contains a variety of tea bushes with more to be planted. Demand is good for the best leaves which are organically grown.  As a result, she is now much busier than she used to be.

She wakes to the warmth of the rising sun. The cattle start mooing for their feeding time with her, as usual. She has reared two pigs, two cows and there are 11 hens that roost near her modest home. She cares them, too, as she would her own children and even forgets her own hunger to feed them. The fodder for the cattle includes green grasses, vegetable leftovers and Amlisso leaves – all of which are purely organic from her own field. She has personal knowledge of organic cultivation, understanding its benefits on human health and environment. After feeding the cattle she cleans the cows and pig sheds. The cow dung is kept in heap under the shade for decomposition to make organic manure. She also has a provision for collecting cow urine separately in a concrete tank on the floor. This is used as liquid fertilizer in the tea field.

Mrs. Rai’s devotion towards organic tea farming has influenced the Gorkha Tea Estate, where she takes her finely plucked leaves. In return, the Gorkha Tea Estate endeavors to motivate tea farmers like Mrs. Rai by making provision of co-operatives, distribution of cows to the farmers, construction of cowsheds, supply of bio-gas, a higher price for the tea leaves, market bonus to the farmers, free training and organic inspections necessary for certification. Farmers like Mrs. Rai are quite happy with their organic tea farming!

Mrs. Rai also devotes the morning to worshipping god and bathes daily. She says, “The secret of inner peace is to believe the god and world of tea.” She takes tea farming as the transcendent of Lord Gautam Buddha, as it is believed that the tea plant arose from the eyelids of Lord Buddha.

Now, with a cool and charming face, she starts to prepare tea and breakfast for her family. Her grandchildren love the way she prepares the tea, and say they can’t wait for a cup served by their granny. Her mesmerizing face soothes everyone in her house. She in happy mood, going to her field with bamboo basket.

The tea bushes eagerly await for her arrival. She plucks the tea leaves carefully and treats them like a queen. Her old, wrinkled hands are still strong, and she loves the tea without bias toward even herself. Mrs. Rai plucks tea from 9 a.m. to noon, putting aside her hunger. Her family is as devoted to the tea garden as they are to her. Her daughter-in-law brings lunch to her in the field and serves her lovingly.

With renewed zeal and enthusiasm, she starts her work again till 2 p.m. She collects all the finely plucked two leaves and a bud and takes them to the processing unit – two hours journey back and forth from her field. She handles them carefully in her basket, so as to not damage any of the fragile leaves. After returning from the processing unit, she goes to her field again where she has planted alaichi (cardamom), amlisso, beans, vegetables and such. She takes care of them, too – weeding, chilling, watering, mulching, manuring and so on.

At dusk she returns to the cow shed where she milks the cows and feeds them. She manages in her busy time to spend precious moments with her grandchildren in the evening. After dinner, she tells the folk stories of the Kiranti culture to her family. The grandchildren are lured to their sweet dreams by her soothing lullaby. Finally, at the end of the day she sleeps soundly with a hope of being with her tea bushes the next morning as usual.

Mrs. Rai is just one of the many, many Nepali mothers who contribute to quality tea from the Himalayas.

Learn more about Nepali tea as Suzette Hammond shares her insights on the Nepal tea industry. 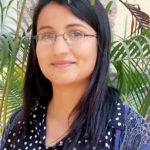 Susma Bastola earned a B.Sc. in Tea Technology and Management at the Mechi Multiple Campus, Bhadrapur. She works as an quality controller at the Gorkha Tea Estate in Fikkal, Illam, Nepal.

by Blue Moon Tea - 1 month ago

by Teasy | Designed for True Taste - 2 months ago

by Narendra Kumar Gurung - 3 months ago