‘Fish House Punch’ was created in 1732 at the The Schuylkill Fishing Company gentleman’s club in Philadelphia. This angling club, which is still in existence, was the first of its kind in the American Colonies, and claims to be the oldest social club in the English-speaking world. George Washington and Benjamin Franklin, as well as of course, the Boston patriots, enjoyed fish House Punch. Who knows? It may have been used to fortify the nerves and warm the bodies of the Tea Party participants on that fateful night. While the original 1732 formula is still secreted away at the Fish House (as the club is referred to) many recipes and variations have circulated over the last 280 years, through the colonies and beyond.
It is typically shown being diluted with either water or tea. All written records of variations refer to either black or green tea, which is what was available at that time, but to tease forward the flavors of the Peach Brandy, we prefer a good wulong. The recipe which has been served a number of times at L’Espalier and will be served again this December in honor of the Boston Tea Party, was adapted from research by David Wondrich for Esquire Magazine. 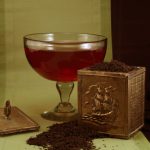 The ready availability of ice is a modern luxury. Since our forefathers were typically drinking at room temperature, they would balance it with more water and tea than you might, as they did not have to account for dilution from the ice.