On the phone, my young friend sounded rather shy but proud and excited, and I accepted the invitation at once. His first imports, six chests of tea, had arrived in his in-laws’ garage. We could taste them there if we promised not to scratch the hood of the Buick.

His father-in-law doubted the wisdom of starting a tea business, saying Americans don’t drink tea, but Devan had replied, “Then I’ll teach them” and plunged ahead. He had just married Reena Mahesh, and she supported his decision. It wasn’t long before they acquired Chado, a fledgling tea shop on the edge of Beverly Hills. I was invited to officiate at the Grand Opening. Reena took over running Chado while Devan went about growing his newly christened India Tea Importers. By then, I was their devoted student and friend. Since then, they have played a decisive role in developing America’s tastes in tea.

Can you remember when there was no chai in this country, and Snapple was the only ready-to-drink bottled tea? Devan taught Seth Goldman how Nilgiri tea from south India makes iced tea that tastes great and never clouds, and Seth used that tea to launch Honest Tea, a brand that earned $600 million last year. As a proud Indian, Devan thought chai was just what this country needed. He coached Heather Howitt in creating chai and helped launch the brand from his 10′ x 15′ booth in 1994 at the Specialty Food Association’s Fancy Food Show in New York. Seth and Heather soon had competitors, of course, and today chai and RTD teas are available from coast to coast.

But large customers were not the backbone of his business: No order was too small, many of the new-born tea businesses that began sprouting around the country Devan coached into prosperity. He could speak from the experience of what worked for Chado, and in time Reena opened a second location.

By then, Devan had absorbed what I’d learned about China and Japan teas and decided to re-name the company. More expansive than “India,” it became International Tea Importers. Ill at ease in public speaking, Devan relied on me as his spokesman when possible, and everywhere that Devan went, I was sure to go. In time he took me home with him to India, and I returned vastly more knowledgeable, not to mention spiritually transformed.

On our second trip, we served as international jurors at India’s first Golden Leaf Tea Competition at the Nilgiri hill station of Coonoor, where Devan had spent school vacations on the tea estate managed by his eldest sister’s husband. He compelled me to undertake James Norwood Pratt’s Tea Dictionary, a five-year task which he financed all the while making ITI a leading US importer of fine teas with an inventory of 500 selections in his warehouse available by the pound or by the ton. Thanks in part to Reena’s mother, Margaret Mahesh, their children Brendan and Bianca suffered no lack of family attention growing up while their parents worked.

In 2014 during the World Tea Expo, I was privileged to present my tea brother Devan with the John Harney Lifetime Achievement Award. He was just 51. Two years later, he was reft from us, dying most unexpectedly in his sleep. Reena and her business partner Tek Mehreteab now preside over four Chado locations, and Brendan and Bianca are the youngest Co-CEO’s of all the world’s major tea firms. The Los Angeles International Tea Festival he founded has been re-named in Devan’s honor. The tea education initiatives he founded and supported in this country and India live on ― memorials to a man of enormous accomplishment and great good heart. Indeed, my dear noble tea brother and friend lives on in many hearts and nowhere more than in my own.

This tribute first appeared in May/June 2020 issue of The Tea House Times. 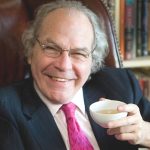 James Norwood Pratt is widely acknowledged as an instigator and prophet of America’s present tea renaissance. The Ultimate Tea Lover’s Treasury, his now classic “bible of tea”, remains the most comprehensive compendium on tea in English. With numerous columns, articles and interviews in overseas tea periodicals and books which have been translated into French, German, Czech and Chinese, he is perhaps the world’s most widely read author on the subject today.