You can’t help but notice that Craigmore is very, very clean. Right from the gate, the gardens, the offices, the factory, the schools… clean is a word that comes to mind often as one tours the estate.

The force behind it is MN Bopana, Craigmore’s Managing Director. He’s been here, and at it, for 16 years now, and his energy and enthusiasm are contagious. He took over as Craigmore’s MD when only 38 years old and if his achievements are a yardstick, it’s Craigmore’s No. 1 lesson to India’s tea gardens: that younger directors can be an asset.

Bopana was with Tata Tea, had been there 15 years, when Craigmore came calling. He recalls his first meeting with Azad Shivdasani, Craigmore’s Chairman, “I said no. I thought there was no one bigger than Tata Tea. But when I went back, I realized that Azad had not asked me even a single question about tea. Instead, he was keen on my views…One of the reasons I decided to join was the personal rapport with him. And that he listened.”

It was Azad who was keen on a young Managing Director. Bopana recalls, “He said, I want to hold you responsible and to run Craigmore for a long time. MDs come at the fag end of their career, with 3-4 years to retirement. Who’s answerable for the work they do here?”

“I finish 16 years here. I can’t make excuses,” says Bopana. He took over Craigmore in May of 2004. The financial year was a month gone and that year’s revenues were already his responsibility. Craigmore was losing money then. Bopana decided to dive right in and get started. He admits it was intimidating because there were so many people who were much older, more senior, and now reporting to him. If he thought he would have to fight his way through them, he was in for a surprise. “In June, Azad visited. He’s a soft-spoken man…the worst word he’ll utter is ‘naughty’! So when he made a speech to the executives, saying those who cannot work with me will have to leave, everyone took it seriously. For me, it was a great show of support.”

The first few years were undoubtedly tough. But Bopana says his age worked in his favor – sufficient maturity but also the flexibility that made him willing to absorb anything new, be it tech or management practices. 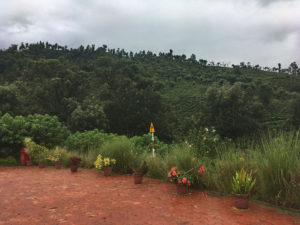 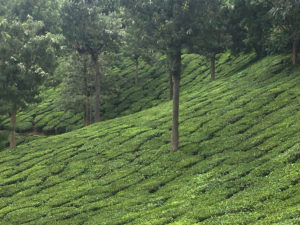 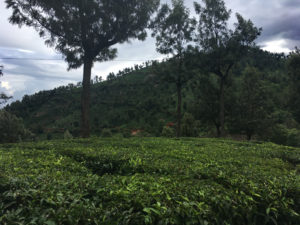 “My dad was General Manager with Pierce Leslie,” says Bopana, referring to the British planting company. Born and brought up in the world of plantations, he was attracted to it and insists that his calling lay here. “I like my open spaces, I am crazy about animals. Where else can you find this kind of space?” he asks pointing to the vistas around us.

Craigmore is 130 years old and spread over 1,200 hectares in the Nilgiri hills. In 1884, it was incorporated as the Ceylon Land and Produce Company Limited. In 1977, the present owners, the Inlaks Group (UK) bought the company and all its factories.

Recalling his time with the Tatas as “fun days” when he worked as an assistant manager, with far less pressure and a great lifestyle, he says, “I saw that power can corrupt but is also a humbler.” Joining Craigmore, he brought the desire to run a certain kind of company, where it’s organization first. “I am not a fan of the bottom-up approach,” he says.

Funnily enough, very little of the conversation we have is about tea and more about what makes Craigmore tick. On the tour of the estate, Bopana’s pride is evident in how Craigmore looks after its people.

The crèche for children under five who live on the estate is, like the rest of the estate, scrupulously clean. It’s airy and cheerful with ample comforts for the children. A carefully designed menu and a daily schedule ensure that the children’s nutritional requirements are met, and developmental milestones are regularly monitored. With the new influx of workers arriving from Jharkhand, the nutritional levels are low and a lot of focus is on ensuring that these children achieve and maintain normal levels. 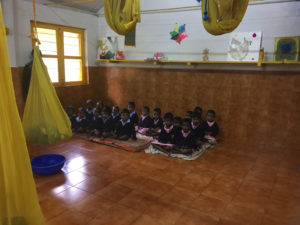 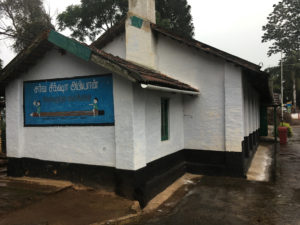 The CrecheThe primary school on the estate

Elsewhere a school is in full swing, the shops are stocked with provisions to cater to the residents, tea is being brewed for everyone, the canteens are buzzing, an ambulance is parked and ready if the need should arise…great care and thought to underline these facilities. 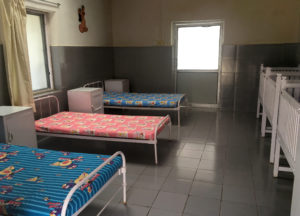 Hospital on the estateThe children's ward in the hospital wing 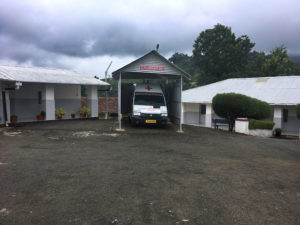 Hospital on the estateThe hospital wing, with an ambulance for emergencies. 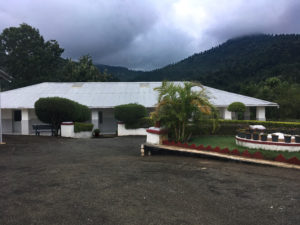 Most telling of this is the hospital on the estate; the medical facilities are impressive but perhaps the proof of the wellbeing of the 4000 residents is in the fact that there’s only one in-patient. When water-borne diseases were reported, Bopana invested in improving the water supply and the source of potable water. Every day, all discharge points across the estate are tested for water potability, making clean water available everywhere. Medical camps, waste segregation, daily checks on cleanliness… a great many processes are in place to ensure that there is nothing lacking for the workers and their families. One may think it borders on obsessive but the difference it has made to the place is remarkable and significant. It’s another significant lesson from Craigmore.

Twice a year, Bopana meets around 125 people representing the various divisions and hierarchies. Monthly meetings take place between the deputy general managers and workers and can include meetings, training sessions, workshops… everyone attending signs their attendance. The dispensaries across the estate have a padlocked box, the key to which is with Bopana’s secretary. Every patient drops a feedback form on the quality of service that they were provided.

Staff welfare, management-labor relationships, cleanliness, safety are evidently top priority. The yardstick is, will the managers and executives send their children to the crèche or school? If it’s not good enough for them, it’s not good enough for anybody. Employees are taken care of, and not grudgingly either. Workers at this garden are entitled to the services received.  And there is no cutting corners on the quality of these services.

This attention to detail extends well into the tea factory and in the running of the business. In 1990, Craigmore was producing 176,000 kgs of tea and this has risen to 11,20,000 kgs in 2018-19, with no capacity additions, only improved efficiency and better strategy.

Mechanization was one introduction and Craigmore is now 50% mechanized. The trial towards mechanization began four years ago, across one small area for one year. The workers, as expected, shared the experiences with others, and paved the way for expanding the idea. There was no insecurity or resistance to it. The Nilgiris, Bopana explains has a “rush” period following the rains after March every year. Mechanization has helped maximize the rush because the machines cover double the area as the number of people. There’s a saving on man-days but is not a cost-saving exercise. It has compensated for what’s in short supply in these parts – labor. 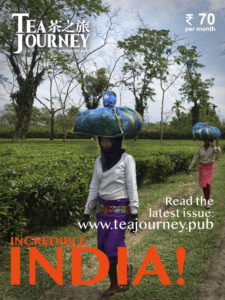 Given that the Indian tea industry is struggling, Craigmore’s profitability is particularly interesting. The estate produces orthodox green and black tea, with the former exported and the latter sent to the auctions. Over the years, the balance has tilted to favor more green tea production to meet the demand. But is the Nilgiri tea able to command the same price as Darjeeling?

To get a bit of the back story, the Nilgiris enjoy a high elevation and have widely planted chinary bushes, both factors that bode well for good orthodox tea. And sure enough, in the 60s and 70s, they occupied prime spot in the export market. The opening of the Russian rouble trade offered a ready CTC market and the Nilgiris embraced it too easily, too quickly. Factories began to produce CTC, leaf standards dropped and as Bopana says, the art of tea-making was lost. He calls it the “great harakiri” that allowed Darjeeling to step into the fray and command the European market.

The Nilgiris has caught up substantially since then but Bopana admits that it has lost a good 10-15 years. He says it was the sustained production of orthodox teas by the corporates, even during these years that has helped retain its place in tea. The EU remains its main market, which makes compliance very high in these tea parts.

With the demand on compliance came the exercise to ensure that every aspect of life and work on Craigmore meets and even exceeds minimum standards. All the insights and regulation and systems have been happily implemented. “We started with GAP,” says Bopana, of the Good Agricultural Practices certification. This took care of the plants. Then came UTZ for sustainable farming, followed by ETP for ethical trade partnership. The Rainforest Alliance certification followed – a gold standard in certifications for tea – Craigmore in fact is the world’s most rainforest compliant tea garden. All aspects of the estate have been audited and addressed. “Every consignment is tested for 399 substances.”

There’s a dustbin every 100 feet on the grounds. No litter around. There are 4,000 people living on the estate, averaging 20 liters of water consumption per day. There’s severe water shortage in these hills but Craigmore is self-reliant with 100% rainwater harvesting. “There’s not a single borewell on Craigmore,” says Bopana, with justifiable pride.

Clearly, the story of Craigmore is not just about tea. Still holding on to a largely chinary garden – only 25% is clonal – the tea itself is superlative – the Hyson is wonderfully sweet, the Moroccon style pan-fired pellets are a signature tea. They stopped white teas a decade ago and only make specialties like the frost tea on request. Anything that can’t be offered consistently is not pursued.

There’s a lot of care and thought that goes into everything that crosses Bopana’s desk. The Moroccan style tea pellets offer advantages in packaging and warehousing because of its higher density, which makes shipping costs more efficient. With everything, there’s a great desire to find solutions rather than make excuses for problems. “We have no plantation baggage, we are willing to try something new. Finding a solution is not hard and we don’t want to make excuses.” And this must be Craigmore’s most important lesson to India’s tea industry.

I am proud of my team, he says, adding that they were handpicked by him. He talks about how tea gardens offer a lifestyle, not just a job. His executives are housed in fabulous old bungalows. The lifestyle is the incentive to work here, and the plantation way of life is still pretty strong. And Bopana talks about mentoring his execs, supporting them to learn the ropes, and offering them the resources they need. Like in the old days.

He also speaks of something that one doesn’t hear much in businesses – ethics. When a neighboring estate’s workers went on strike, he called his executives and warned them that if any of them hired those striking workers, he’d sack the exec. “I was not going to take advantage of someone else’s situation. I am not willing to profit from another’s misfortune.” He talks about the present lack of unity and his desire to work for the industry as a whole.

The era of the “gentleman planter” may have ended in the world of Indian tea but in Craigmore, led by Bopana, one gets a sense of what may have been, and what could be.

2 thoughts on “The Gentleman Planter of Craigmore”