I began visiting tea markets to find companies selling interesting teas. I spent countless hours sipping teas at tea shops trying to find genuine wild tea. It proved to be difficult. Some marketers would claim to have authentic wild tea, but when I asked to see the mountain where the trees grew, they would hem and haw or downright refuse. When I questioned them, they would come up with weak excuses such as, “We don’t want anyone stealing our secrets.” After a while, it dawned on me that such people were lying and never had access to real wild tea.

One day after a long, arduous day searching through the tea markets, I stumbled upon a little unsuspecting tea shop. What interested me was that on the outside of the door was a sign advertising I-Ching conversations. I went in with my translator, a good friend of mine, and a successful lawyer in Shenzhen. Inside, a man with wide opened eyes, wispy black hair and a traditional Chinese shirt, was sitting behind a beautiful wood tea table. Around him were several young ladies, all of whom were wearing welcoming smiles. There was also a little old man, sitting quietly in the corner of the shop, staring into a plastic bottle with an LED flashlight. He was dressed in plain dark khaki pants and a black jacket. His skin was pale white. Everyone in the teashop was wearing jade either around the necks or on the wrists.

“He cha!” (meaning ‘come and drink’) he shouted enthusiastically.

My friend and I sat down while this man began to brew some quite fragrant tea. He had a very erect posture and appeared to be brimming over with energy.He appeared to be the man who owned the company.

The brew had a dark amber liquor with a lustrous glow. I took a sip and felt the smooth liquor passing through with remarkably no astringency. There was a pleasant bitter aftertaste, which turned sweet and silky.

“What type of tea is this?” I asked curiously as I sipped the tasty brew.

“This is Wuyishan rock tea,” the man replied as he rubbed his jade necklace. I asked him what the story behind this tea was and he began to tell a story unlike any I have ever heard about tea.

Deep in the mountains of Wuyi, tea trees grow wild and strong, protected by forests of bamboo and pine trees all around the edge,” he began. “The sun, air and earth are balanced just right to grow an unrivaled, unequaled tea of the highest caliber. It is known as rock tea because this tea actually grows in the rocks and rocky soil. The tallest trees are found at elevations above 2,000 meters (more than 6,600 feet) and the leaves are so filled with flavor and fragrance, they can be brewed up to 15 times. The trees are more than 200 years old.“

The most interesting part of the story was about to unfold.

“When the harvest season comes, I wait until the trees align with the constellation of Pleiades and then I pluck it. Tea is one of the most absorbent plants in the world. I plant fragrant flowers next to it and it absorbs the fragrance. This happens not only in this dimension, but also on an energetic level. That is why we as Daoists believe Feng Shui, star alignment among other things all contribute to the energy of the tea.”

I was simply stunned by what he was telling me. In all my years drinking tea back in the US, I never heard anything like this before.

“Breathe the aroma through the nose and it circulates through your upper body. The fluid feels clean and rolls over your tongue. The tea feels as if it is a strong spirit. It is considered a spiritual experience by many.”

This started to feel like tea Qigong to me!

“At one time,” he continued, “Wuyi Mountain was a volcano and so it made the soil very rich. The clouds are always surrounding the mountain. From the Tang Dynasty, the tea from this mountain was famous despite the fact that there were not many famous teas from that time. Many scholars and authors wrote about this tea that was sent as a gift to the Emperor. In those times, it was so precious it was worth more than gold. The Emperor would not give any to his staff. They printed a thin gold sheet with a picture of dragon and phoenix stamped on it to wrap the tea.”

“How can you prove this tea is really wild?” I asked suspiciously.

“Come to Wuyishan and I will show you. I will take you hiking high up in the mountain where no cars or machines can go to see the wild tea.”

“OK!” I responded, excited about this possible new adventure. After hearing his story, I was dying to go see this tea for myself.

When I stepped off the plane in Wuyishan, I was greeted by a small group of people, all of whom I recognized from the teashop.

“Welcome to Wuyishan!” The little old man greeted me in perfect English, completely taking me by surprise. I had no idea he could speak English, because the whole time in the shop he was speaking Cantonese to my translator and acted like he could not understand me.

In the following days, we went on magnificent hikes in the mountains of Wuyishan looking at some amazing tea plantations. I saw the village tea pickers hiking together to and from the mountains, and little old men carrying very heavy bundles on their backs with ease. These people were much healthier, stronger and looked much happier than most of the people I had encountered in the city. I saw caves where the legendary Daoist monks had meditated. I saw beautiful meandering rivers with people cruising downstream on bamboo rafts. The smooth, round red mountains were unlike any I have hiked. Not only was the nature spectacular but the energy I felt there was especially intriguing. My Qigong felt strong and my mind was relaxed, giving me the ability to go deeper into meditation. The surroundings spoke to me.

What really blew me away was the wild tea garden found high up in the mountains. Tall bamboo grew all around the tea trees. To my amazement, it appeared the bamboo trees were arching over the tea trees, as if protecting them. At first, I thought maybe they were bending like this because they were leaning towards the sun, but when I checked, the sun was in a totally different direction. When I looked closer, no matter which direction the bamboo trees were facing, they grew such that they formed an arch over the tea trees. Behind the bamboo forest was a beautiful green pine forest. The pine is considered the ultimate protector of the forest. What an amazing synergy I was looking at right in front of my eyes. The tea from that tea garden was hands down the best wulong I ever. Now I only buy my Wuyi wulongs from this area. The flavors are complex and taste of the forest. The energy is unforgettable once you have had a taste. After a sip of these wulongs, you can never go back. It is like a person who drinks their first good aged wine or the person who has 20-year old aged balsamic vinegar; once you try the real thing you can never go back to your bagged tea or your berry-blended black tea ever again.

Studying with a Daoist Master

“When you meet a real Daoist, you will never know you’re in the presence of one. They will come dressed like a normal person and they hide their abilities,” the little old man explained. We had endless talks on Daoism and I-Ching. After a few days, I got the feeling the little old man was the real owner of the company. Then he invited me to stay at his house. It turned out he was from a secret Daoist sect that had a long history. His knowledge of Daoism and I-Ching was far more extensive anyone I had ever spoken to. He could answer any question I had with ease.

It sounded borderline outrageous, but as I realized in China, anything and everything is possible.

I decided that Wuyishan was such an amazing place I wanted to bring others there to study Daoism, Qigong and hike to see the wild tea. What is better after discovering treasures than to invite others to share them? Later that year in May, I led a group of about 10 people to Wuyishan where we studied tea and Qigong with the Daoists. None of the people on the retreat knew anything about tea other than what a bag of Lipton tea was. Before ascending to the wild tea mountain, I first brought them to a massive tea plantation where the forest had been cleared out and tidy rows of small tea bushes stretched out in every direction as far as the eye could see. It was obvious the soil had lost the rich color that was prevalent all over the Wuyishan Mountains. I brought them there first because I wanted them to have a reference point. Because they didn’t know anything about a tea plantation or the tea industry for that matter, had I first brought them to the wild tea mountain, they would have no way to appreciate what they were witnessing.

Later that day, I brought the group to the wild tea gardens hidden in the remote mountains of Wuyishan. There were huge tea trees that grew like massive bushes, towering at heights up to almost 20 feet. The trees were up to 200 years old. There was even a wild, ancient tea tree forest, which we walked through. It was the first time for everyone in the group to walk among such wild, old trees. Everyone was stunned by the experience. They were amazed at how magical and beautiful the trees were. They could see how the tea trees grew in harmony with the surrounding environment. It was at this point that they got it. By seeing this stark contrast in growing environments, they grasped the critical difference between a wild, ancient tea and standard mass-produced farmed tea. After that, they always demanded to drink a wild or ancient tree tea. Our days were wonderful, we woke up and brewed tea together ritually and then immediately went into our morning Qigong practices. After breakfast, we would drink more tea before heading out to a Daoist temple to meet some of the Daoist masters for some special teachings. 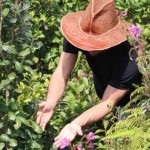 3 thoughts on “Hunting Down Wild Jin Jun Mei from Wuyishan”