South Americans consume an invigorating range of hot beverages from yerba mate in the south to robust coffee grown in Colombia and Brazil. In Chile tea ranks among the most popular of beverages with a per capita consumption of 486 cups per person, according to La Tercera. Bolivia ranks fourth among South American nations with a taste for tea. Average consumption is 75 cups per year (about 1.5 cups a week).

Tea is similarly popular in Argentina (95 cups per year, about two cups per week) and in Uruguay (80 cups per year). Bolivians are spending more on better tea, but coffee consumption averages one to three cups a day in urban Colombia and Brazil and tea consumption is practically nil in Guatemala and Ecuador.

Tea cultivation in Bolivia began in 1925, with an unsuccessful attempt by B. de la Torre, who cultivated a few dozen plants near La Paz, producing a few pounds of tea that were sold at the local market, according to a study by the Faculty of Agronomy at the Universidad Mayor de San Andrés. It was not until 1948-1950 that the company Gunther Sucesores successfully cultivated tea in commercial quantities on farms planted near Mapiri, in the province of Larecaja. Tea estates at lower elevations have since spread from Mapiri to Alto Beni, Chaparé, and to Caranavi, Alto Chaparé, Yungas of La Paz, and part of the Department of Cochabamba. La Paz is situated in a high-mountain canyon at 12,000 feet (3,650 meters), the highest administrative capital in the world.

Tea does not grow at extreme altitudes but benefits from the mix of cool and humid air common to the Andes Mountain range.

The Bolivian tea market was valued at $119 million in 2015 and is expected to reach $290 million by 2025, according to Market Research.Com.  The average value of what Bolivian’s spend on tea is expected to grow from $11.25 per capita (retail) at almost 8% per year.
“The tea market has evolved dramatically in the past few years in line with consumers’ changing behavior. Customers are showing strong preferences for functional botanical blends and single estate artisanal teas. Tea drinkers are more interested in high-quality products with a great story and drinks that give them specific health benefits. The perception of tea has also changed, as it is viewed by most younger consumers as a sensual and wellness drink,” according to Market Research.

In the decade that followed, artisanal cultivation and processing of specialty tea was promoted and grew rapidly. As the domestic market expanded, tea sales progressed from bulk to tea packed locally in tins for domestic consumption.

In 1960, work began with cloned plants from Argentina, based on investigations by the National Institute of Agricultural Technology (INTA). Joint work with Bolivia began a few decades later, from Cerro Azul of INTA in Argentina to the plant’s genetic improvement.

In the late 1970s, the Bolivian government, coordinating with a Chinese mission, built tea processing plants in Caranavi and Chimate in Yungas, harvesting raw leaves from approximately 1,500 acres (600 hectares). After 15 years of support from the Chinese, Special Teas ChaiMaté SA was launched.

In 1998, the La Paz prefecture privatized the industrial tea processing factories in Caranavi and Chimate, which led to a reduction in tea production that essentially halted expansion in this productive northern region of La Paz.

A third consecutive failure to maintain tea production in the region in 2001 was the turning point as growers, responding to an export market rewarding the production of clean tea, began producing organic teas from seedling to cup.

The turning point followed a decision to produce teas without chemical fertilizer or pesticides in compliance with both U.S. National Organic Program (NOP) and EU Regulation 2092.

In 2003 the Bolivian government began investing in the region through its Poverty Alleviation Project. In 2005 the ChaiMaté Tea brand was the first ecological tea, certified organic by IMO Latin American Control, with the participation of the Chaimate (80%) and Caranavi growers.  USDA National Organic Program (NOP) certification followed.

“The decision empowered farmers to take charge of their own destinies, ultimately creating a truly sustainable way of life for their families,” according to Teas Etc., a U.S.-based distributor that in 2010 signed an agreement to exclusively represent ChaiMaté s at the World Tea Expo that year.

Teas Etc. explained that Bolivia’s teas are grown in the pristine valleys of the Andes Mountains 5,000 feet above sea level. “The convergence of cool air from the snow capped peaks of the Andes and the warm moist air of the Amazon provide an environmental synergy that manifests in the extraordinary cup quality, unlike teas from any other origin,” according to the company.

The family-owned tea gardens in Mapiri now cover 600 acres and the factory at Chaimate produces 50 metric tons of orthodox processed green and black tea. “Fostering a way of life filled with hope and opportunity initiated this unique cooperative,” according to Teas Etc.

The effort inspired other growers to do the same: Hansa Ltda. Windsor, Agroindustrias, Eco Caranavi, Naturaleza, and Horniman’s which currently has approximately 650 acres (270 hectares) under tea.

In 2015 a small group of producers in the mountainous of Caranavi launched Té de Montaña (Mountain Tea) on plots rehabilitated with a vision of restoring the local tea culture and promoting the healthy properties of tea grown in Bolivia. 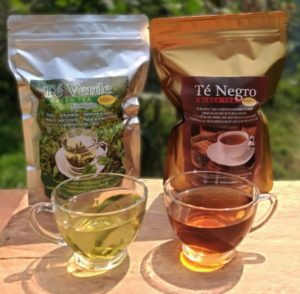 Their plantation is located at an average altitude of 1,500 meters, with temperatures that range between 15ºC and 25ºC. The garden is planted with a density of 12,000 plants per hectare, and Godofredo Quispe, David Quispe and Josué Quispe say they mainly produce green tea (60%) with the remainder processed as black loose-leaf. The farm produces up to 500 kg, approximately every 40 days, from September to May. The tea is harvested manually, with the intent of pursuing certification as an ecological tea, with respect for the biodiversity of the area.

“Mountain tea sells its product in tri laminated material containers to preserve the quality of the tea, which is usually being marketed in organic product stores nationwide,” according to Godofredo Quispe.

The United Nations Food and Agriculture Organization (FAO) notes that since 1980, tea production has continued to expand. The global market remains underserved growing at a combined annual growth rate of 8.2% and is expected to generate $233 billion in revenue in 2021. The tea industry’s average revenue per person (retail) suffered a setback in 2020 but is expected to reach $31 per person in 2021. Exports remain modest, the Bolivian Institute of Foreign Trade lists Chile and the U.S. as major trading partners.  The value of Bolivian exports appears to be on the rise.