Meitan county is located on the subtropical Guizhou Plateau which lies south of the Yangtze River. The steep terrain that bounds the plateau is marked by massive craggy limestone boulders cut by fast-moving streams.

Tea is planted in the northern part of the plateau, about 70 kilometers from Zunyi (known as Guizhou’s tea city). Meitan county is 65% covered by a forest of conifers with oak and chestnut and a floor of figs, legumes, and ferns. Camellia trees, the genus that gives us tea, are native. Trees in steep basins cling to the Karst limestone amid caves, sinkholes, and underground rivers. The 37,333 hectares of tea growing there are surrounded by a beautiful ecological environment where the average temperature is 15℃ — rainfall averages 1,112 millimeters (with only 165 days of sunlight). The massive plateau is rich in zinc and selenium and ranges from 1,000 to 1,400 meters above sea level. Meitan is at 972 meters and well suited for growing tea trees.

Meitan has a long history of tea production. It is the largest tea-producing area and exporter of black tea in Guizhou province.

Production exceeds 60,00 metric tons and generates $1 billion in sales. Ch’a Ching (The Classic of Tea) the world’s first tea monograph on tea was written the Tang Dynastywritten by Lu Yu (760-762 CE). Lu Yu describes the tea of Meitan county as high quality by the Qing Dynasty, the “Book of Guizhou” describes tea growing in all parts of Guizhou Province. 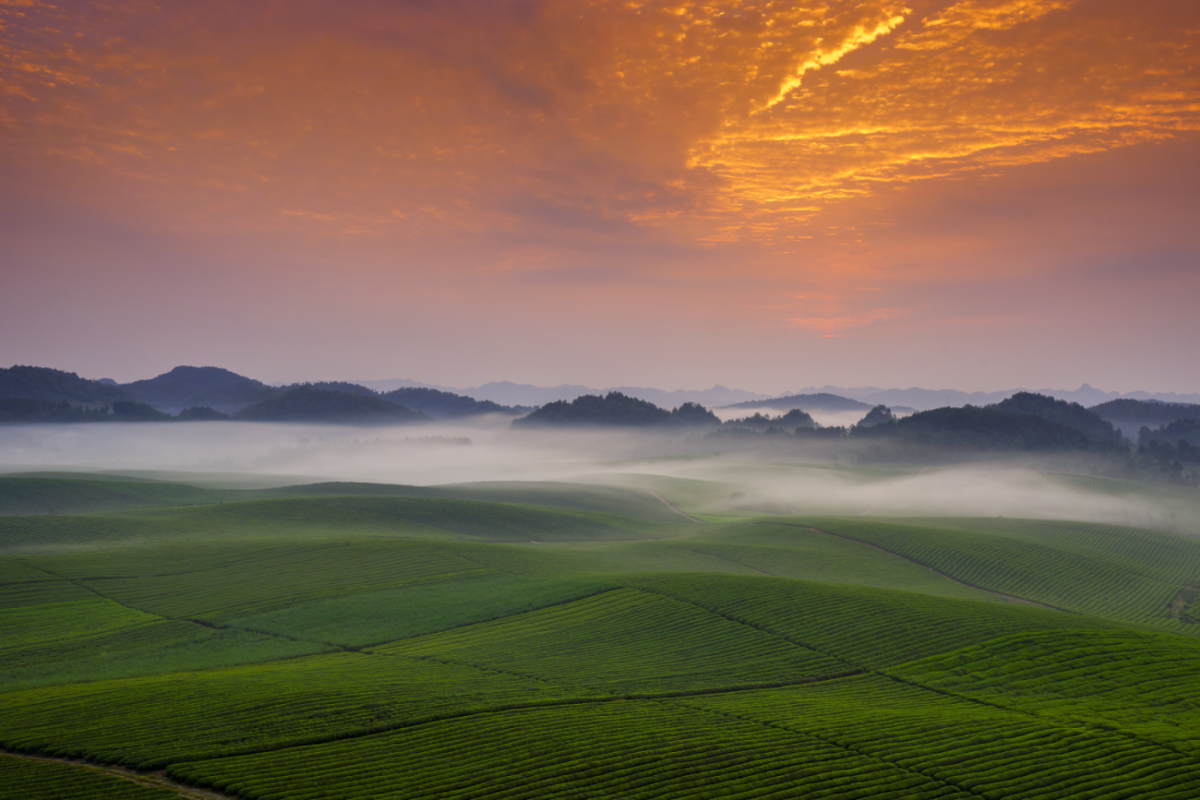 Meitan Cuiya is an early spring green oxidized for a few hours in the shade before processing. It is made from high-quality fresh and tender tea leaves and undergoes 20 complex processes, including spreading, fixing, shaping, and drying. The leaves appear straight and flat. The aroma is long-lasting above a bright green liquor. The tea has a fresh taste with abundant amino acids, polyphenols, and vitamins. 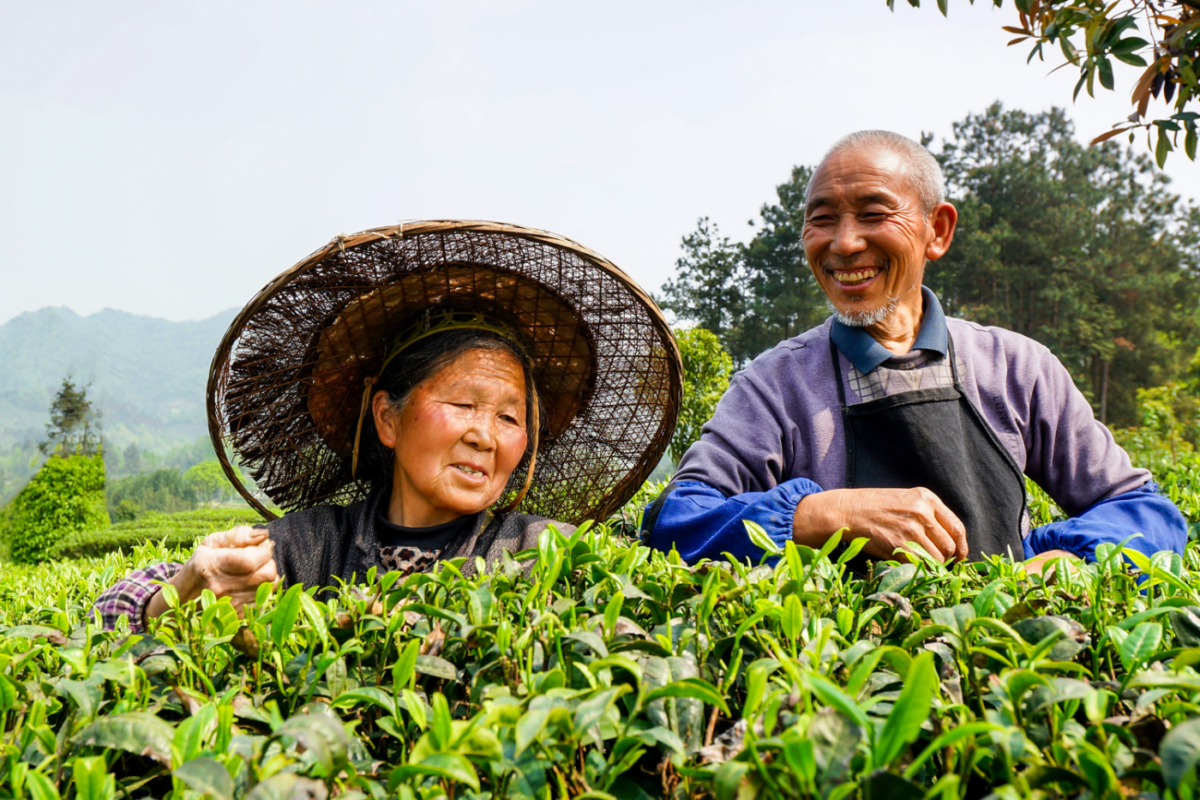 Zunyihong is a black tea with gold tints that produce transparent red liquor with a rich aroma and a long finish.

With great attention and strong support from governments, the tea industry has become the most critical pillar industry in Meitan county. From 2009 to 2017, Meitan won the title of  “National Key Tea Producing County” successively. In 2015, it was called the “First tea county in Guizhou Province.” In 2016, it was named one of China’s top ten most beautiful tea villages.” 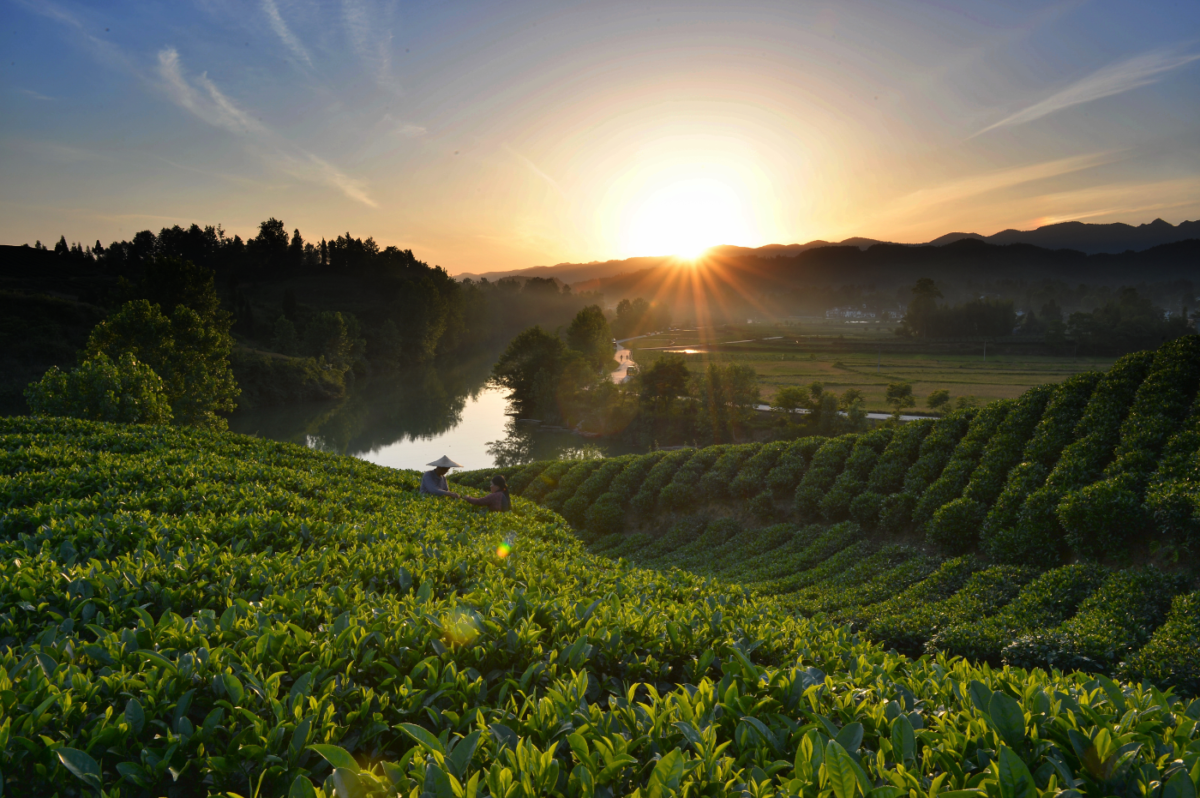 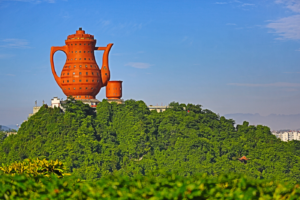 No one can miss seeing the World’s No.1 Teapot; a Guinness registered landmark. The 73.8-meter building, shaped like a teapot with a nearby cup, is Tianhu Park. There are 15 floors in this teapot with a diameter of 24 meters. The Tianhu Hotel occupies the first seven floors, and the 8th floor is a multi-functional conference hall. The 9th floor is for Tianhu painting and Calligraphy Academy, and the 10th floor is a Tea Tasting Hall and Tianhu sightseeing platform. Visitors will experience different kinds of tea cultures and drink all kinds of tea in this teapot – which, if filled, would hold 28 million liters of tea.

China’s Tea Park is located in Meitan County. It is the largest tea park in the world, with a tea-producing area of nearly 2,867 hectares. The fresh air and strong tea fragrance gladden the heart and refresh the mind. The landscape in the park is primarily low hills. Tea plantation is in accordance with the trend of mountains. The park retains its historical memory and cultural connotations.

Related: The Concept of the Ecomuseum and its Practice in China
The UNESCO Digital Library 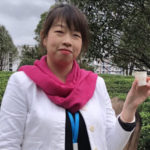 Vida (Wei) Peng is a writer based in Beijing who works at the China Tea Marketing Association. She loves tea and was employed in the Chinese tea industry for eight years. One of her most recent works is “Construction of Integrity System in China's Tea Industry” for the China Tea Industry Development Report.