In the southern lowlands of Sri Lanka, at Kotapola, approximately 15 kilometers from Sinharaja, the island country’s largest rainforest, lies the Kaley tea estate. Their website describes it quite poetically, as being surrounded by forests and nourished by tropical sun and rain, cool mountain mist, and gusty winds. The estate, owned by Udena Wickremesooriya and his family, makes organically grown artisanal teas.

Further up, in what’s called hill country, lies Adam’s Peak, a place of spiritual significance for Sri Lankans. Buddika Dissanyaka, having left a 15-year old career in tea plantations, was looking for a plot of land to make forest-friendly tea. While on a climb to Adam’s Peak, he spied some tall tea trees growing on an abandoned tea estate. The estate, Warnagala, that had been planted during colonial times but abandoned some 130 years ago. The tea plants had grown uninterrupted, reaching heights of 30 to 40 ft. Buddika felt he had found his source of tea. His brand, Forest Hill, is pioneering forest tea from Sri Lanka.

Located in Ella, the heart of tea country is the Amba Estate, a 120-acre working organic farm. It was started ten years ago by four partners keen to create a sustainable social enterprise. Amba produces artisanal tea, coffee, jams, and preserves. Simon Bell, one of Amba’s founders, says that they started the farm to support the local community, to “put our money where our mouth is.” All four of Amba’s founders, although not locals, are either born here or have lived and worked in Sri Lanka.

Amba offers a working model for a social enterprise. Says Simon, “From the outset, we said we want people to copy us.” Among Amba’s many visitors were Buddika and Udena when they were planning Forest Hill and Kaley Tea Company respectively. Both talk about Amba’s open approach as being an eye-opener. Nothing was hidden, not even the costs and profits, they say. It was a tried and tested model, available almost as a manual for people to take and recreate. Simon remembers Udena commenting on how happy and motivated Amba’s team looked. And that he says, is the result of years of trust-building, and keeping promises to people – this includes paying bonuses to staff in a bad year.

The Sri Lankan tea industry was inherited as a plantation model from the British colonial times. In the ‘70s a law was passed that disallowed people from owning in excess of 50 acres of land. The estates became fragmented. There is a large section of small tea farmers, who grow tea and sell green leaves to the factories, contributing to more than half the national production.

The artisan tradition that began with Amba now extends to more brands like Kaley Tea and Forest Hill. As a model for the tea industry, this is an exciting alternative to the small farmers who may find the cost of machinery prohibitive, and yet, likely to earn the least in the entire supply chain. The artisan model is inherently community-based and inclusive. It doesn’t aspire to replace the plantation model but forges a new path. Small quantities of tea are made with the focus on being handmade, high quality, naturally grown. This creates a product that’s attractive for the segment that seeks products made with care, and that is not exploitative to those who on the fields.

Sustainability is very much a part of this conversation. Says Buddika, “We destroy biodiversity in large-scale planting and my concept was to develop a forest-friendly tea. I live in a valley where 95% of the residents grow tea. Plucking tea is the main source of income. How can we make it sustainable, for the forest, for the farmer, for me, and for the customer?”

For Udena, the desire to create an artisan brand came from a conversation with a rice farmer whose village had many cases of chronic renal disease. The cause was a specific weedicide that was in use in rice farming. Says Udena, “I asked the farmer why he would continue to use it knowing it was causing the disease. He asked me for an alternative. I had none.” The farmer, he says, preferred to die from a disease rather than die hungry.

One of the defining features of the artisan model is the focus on community well-being. All three growers talked about it at length. Perhaps Amba, more than the others, has had the time to witness the impact in these 10 years. Simon feels it has exceeded expectations. As a first-mover in this space, Amba also enjoyed access to a niche market in the West. Among its earliest buyers have been stores like Fortnum & Mason in London and U.S.-based Harney & Sons who continue to keep Amba teas as part of their very select range from the region. Several of these retailers have visited Amba, seen firsthand the tea making, and the social impact. They go back without demanding a certification.

How is the community impacted? Kaley chose not to buy vehicles, hiring trucks driven by villagers when his tea needs to be transported. At Forest Hill, Buddika involves the villagers by commissioning packaging from them. At Amba, tourism is at the center of the farm’s activities. The local town, Ella, has grown from five guest houses when Amba began to 500 now, says Simon.

On Amba’s property, tea grows on 30 acres. Neighboring farmers grow the remainder. The price per kilo for fresh leaves is more than double the average. Paying a high rate is a nudge encouraging locals to grow tea naturally, adhering as close to organic cultivation as possible.

In 2019, after years of working in close proximity, the artisan tea makers came together to form the Ceylon Artisan Tea Collective. Says Simon, “We said we will do things collectively — marketing, distribution. Eventually, we will set up a sales and marketing arm.”

Forming the Collective has shifted how the artisan model can become more significant in Sri Lanka’s tea story. At its core is a great desire to collaborate, something that is both difficult in the best of times and challenging to sustain. However, the producers agree that in the collective lies their strength. Among its members are a range of skills and expertise. The sharing of skills and resources offers them access to partners and colleagues. For a small farmer, this is invaluable. At Kaley, Udena says, “The collective has taken a life of its own. Our coming together is for specific purposes. We grow in different elevations and terroir. We share our recipes. We walk into each others’ factories. There is strength in the collective. In promoting it, we will all benefit.”

Adds Simon, “Eventually I would like to get to the stage where we work with cooperatives of small farmers. We want them to borrow our model.”

The challenge, interestingly, is in getting people to buy into the vision. There’s an element of skepticism that comes with a new way of doing things, despite the strong foundation of collaboration, cooperation, and transparency.

In October, The Economist reported on the impact of coronavirus on Sri Lanka’s 2020 tea production. The country relies heavily on exports, but current conditions indicate lower than usual production volume (down an estimated 15% through August). The article also stated that “Industrial unrest, pressure for large wage increases, and low rates of mechanization in the sector will all continue to undermine competitiveness and reinforce higher average production costs than in many other large producers.“

The Collective has also been in conversation with the tea board, to be included in the larger industry. That’s still a work in progress as the artisan model is still viewed as a curiosity. “Some say we are too small. Some think it’s a hobby. But there are a few in the industry who say, let’s see how we can integrate you guys,” says Udena.

The Collective’s contribution may not be in the volume or value of production, both of which are still very small. But against the backdrop of industry-wide challenges, it offers a way forward.  Anil Cooke, managing director of Asia Siyaka Commodities PLC, offers a context to what the Collective means to the industry: “Increasingly the estate model is becoming less viable. Costs are so high that even estates are keen to give the harvesting and agriculture work to workers and families. Very early, in Sri Lanka, we took the position of celebrating diversity in tea. As Ceylon tea, we offer multiple choices and tastes. In itself, we have pushed for this differentiation. And the Collective would be a logical extension. The local and international attention has evolved in the niche and specialty tea markets. The aspects of the value and ethos they represent – part of the environment, part of the village, the coexistence of workers, and passion for tea, speak to these buyers. Having engaged with the Collective, I see tremendous strength in their ability to position themselves and gain attention. With the growing interest in tea tourism in Sri Lanka, these initiatives are gathering more interest. They have the full support of the establishment.”

Buddika opines that the Collective is pioneering the artisan market, and is able to showcase exceptional teas that will interest a niche domestic market and equally, the international market. He sees this as being beneficial to the industry at large, and to the country. Simon views the Collective as a brand builder for the Sri Lankan tea industry. It’s not going to solve the problems of the industry but certainly offers a new way of working, a new range of teas, and an opportunity for positive social and ecological impact. 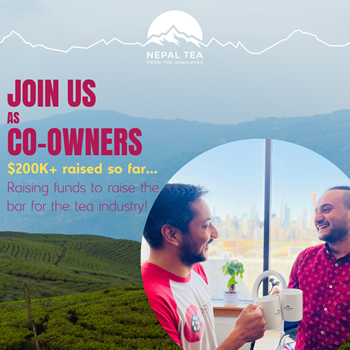