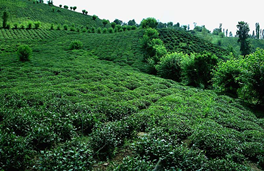 The beverage is served hot at almost all social occasions and family gatherings.

Imported tea still accounts for 95% of the tea consumed in Iran. Today, Sri Lanka and India make up about 90% of imports. China and Kenya are also major suppliers but totals from these lands are dwarfed by the 55% of tea that is smuggled into the country, according to Ali Gerami with Golstan Tea, the nation’s largest supplier with 27% market share.

Tea has been grown commercially in Iran since 1899, when tea plants from Northern India (Kangra) were planted south of the Caspian Sea near Giran, where 85% of the tea is still grown. The first modern tea factory was built in 1934. Today there are 107 factories processing tea from 60,000 households.

Merchants are mostly Azeri and Yazdi, with offices in Tehran. Golstan is the largest, but fourth-generation family operations such as Salim Aria Noush, Ltd. import, export, wholesale, and sell tea online. Zubin tea is another family business and exporter dating to 1898 when it was founded by M.T. Chaichi (Chaichi means tea-holder). The company began as a tea importer but planted gardens in the Alborz mountains on the Caspian coastline. The company is a pioneer in organic production and operated by fifth-generation managing director Zubin Amiri.

“Unfortunately there are wrong and unrealistic views about Iran and Iranians,” writes tea supplier Amir Mirhohammadali. “The country is nice, safe, and historical with kind and friendly people,” he said. 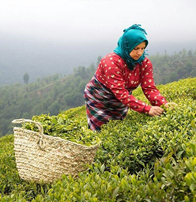 Iran is one of the largest countries in the Middle East in landmass, with a population of 80 million (2017), which represents a four-fold increase since 1956. More than 70% of Iran’s population is under 35 years of age. Life expectancy is 71 years. The literacy rate is 91% and climbing. The largest city is Tehran, which houses 12.7 million in the greater metropolitan area (8 million within the city limits).

Many Iranians left the country during the recent past. In 2010, there were 5 million Iranians living abroad who were born in the country, a million of whom reside in the U.S. Almost 70% of Iranians live in urban areas, up from 27% in 1950. Iran now houses one of the largest populations of refugees in the world.

The economy was growing quickly until 2012 when sanctions to curb Iran’s nuclear weapons ambitions led to negative growth and high inflation. Per capita income stalled at $4,850 per year, with an unemployment rate greater than 11%.

The National Tea Organization (NTO), established in 1958 to regulate tea prices and act as a link between farmers and factories, warehoused most of the country’s locally produced tea. As smuggling became rampant in the 1990s, local producers were unable to compete with smuggled tea in terms of price or quality, leaving most tea unused in warehouses. India and Iran established a banking link in trading in rupees that normalized imports (despite sanctions).

Rampant smuggling “effectively shrunk the local tea market and there was little incentive to invest in new machinery for production,” writes Gerami. Now that sanctions have been lifted and the NTO restructured factory owners can buy direct from farmers, he sees a bright future for Iran’s tea industry.

More than half the tea is sold in bulk, but that is quickly changing as packaged teas and tea in tea bags take hold. Green tea is experiencing the greatest growth (from a small base) and flavored teas “will gain popularity as competitors try to differentiate themselves in an overly saturated market,” according to Gerami.

He predicted “domestic production will be mainly limited to local consumption” and continue to shrink in the absence of proper policies.

1 thought on “Harvest Review: Iran Is a Tea Opportunity”