It is with great fascination that we can study the evolution of the modern cocktail. Tony Abou-Ganim, one of the pivotal leaders of the craft cocktail movement, points to first production of commercial vermouth in 1786 by Antonio Benedetto Carpano as the earliest significant development in the world of mixology. Numerous milestones occurred along the way to the golden age of cocktails from the mid 1800s until 1919, when the advent of Prohibition brought the development and refinement of the craft in the US to an abrupt halt.

It was during this golden age that the term mixologist was first coined, as well as the first ever cocktail book: the historic Jerry Thomas Bartenders Guide published in 1862. During Prohibition, exciting things were still happening in London and Europe, and a certain level of creativity came into play in the US as bartenders strived to find ways to disguise the poor quality and harsh taste of illegal “bathtub gin,” but it took the repeal of 1934 to truly begin the forward movement again.

In the mid-1980s, industry icons such as Dale DeGroff began to embrace the use of high quality fresh ingredients and crafting drinks from scratch. In the 1990s, the culinary and cocktail worlds began to merge, embracing ingredients that had seemingly never before found their way out of the kitchens and behind the bar. As part of this mixology renaissance, we slowly began to see the use of tea, Camellia Sinensis, popping up in drinks more and more often. What an exciting new trend! Or was it?

Tea cocktails are in fact not new. You can find it used in the Jerry Thomas classic, but as early as 1632, references to punch were found in British literature. The word punch is derived from the Hindi word for five (panch) and was believed to have been created, or refined by British East India “company men” before or during their visits to India. For many of us, the word punch brings to mind the questionable day-glow versions of our college party days, or overly sweet and fruity concoctions. Instead we should look to the complex and well balanced version of our forebears, or modern variations created for modern audiences with discerning tastes.

Panch refers to the five required ingredients of every punch:

Early punches were served in taverns from communal bowls that were passed around. They typically held 2 or 3 quarts, but after the wealthy elite embraced punch, large and magnificent punch bowls and sets were created that quickly became status symbols and family heirlooms.

The alcohol in the early punches was distilled in Chinese pot stills that weren’t as pure and clean as modern column distillation allows. Hence, similar to punches in Prohibition, additional ingredients were used to disguise the harshness and impurities. Like many styles of seasoning and preparation in the culinary world, punches and later cocktails were as much a form of self-defense as an epicurean innovation!

Punch meandered its way towards the modern cocktail, through the Hot Toddy (not always just a remedy for the common cold), and to tea sangria, a milder version of a five-ingredient panch. Upon arrival at the modern cocktail, the use of tea had evolved and diversified. Instead of the steeped tea in punches and sangrias, tea in modern cocktails is often a direct infusion into alcohol or a simple syrup.

Infused alcohols have been gaining popularity for several decades now, but they too are not new. They are astonishingly easy to make and a great way to put a new and fresh spin on a classic cocktail, or create original signature drinks.

A neutral vodka offers a blank canvas for your creativity, but most spirits work beautifully if you select your ingredients and times carefully. After vodka, rum and tequila are the most flexible and easiest to work with. Gin, whisky and cognac are a little more challenging, but they are worth the effort to play with because when you hit it right, they can really sing.

Tips to keep in mind:

Sugar can be introduced to a cocktail in various ways, and simple sugar or gomme syrups are a crucial part of a bartender’s arsenal. Syrups not only add sweetness, but can also add richness, silkiness and subtle, complex flavors and aromatics. As long as you are making a sugar syrup, why not use it as a vehicle for additional flavors? Botanicals of all kinds, including of course Camellia sinensis, are ideal for creating unique and special simple syrups.

Many bartenders prefer to minimize the amount of heat needed to avoid breaking down sugar. Others embrace simmering the sugar syrup to enhance the ability to extract secondary flavor additives. There is no one right way; you should simply enjoy playing with various approaches and decide which one you prefer.

Add ingredients to your syrup at different points depending on the level of heat stability of the ingredient. Dried ingredients tend to be more heat stable and can be simmered for extended periods as needed. Fresh fruits, herbs and tea retain their flavors best with minimal heat, so introduce them relatively late in the process or use low heat.

As with infused alcohols, straining is the secret to shelf stability. Strain through a fine sieve rather than coffee filters. When strained and refrigerated, syrups should last a month.

What’s next in tea mixology?

Tea is a flexible botanical that belongs behind the bar and can inspire a mixologist from many directions. Although the concepts and inspiration are centuries old, modern interpretations continue to evolve. For example, food scientist Dave Arnold in his book Liquid Intelligence shows us a variant on the 17th century milk punches where milk is introduced to the punch, curdled and strained. He instead uses “milk washing” to soften and round out an intense infusion of tea in vodka that would otherwise be too astringent.

Here are a few other ideas:

The possibilities are endless. It will be exciting to see the role that tea plays in the continued evolution of the craft cocktails. 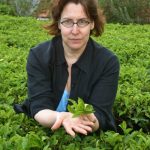 Cynthia Gold is a Tea Sommelier at L’Espalier at the Mandarin Oriental, Boston.