Tea Journey readers span the globe. Half of the magazine’s subscribers reside in Asia and Europe and Africa. That’s why this year’s last-minute gift guide features festive items from India, Europe, and China. These gifts bring to mind holiday celebrations around the world including Diwali (the festival of lights in India, Bangladesh, Pakistan, and Sri Linka), Yawm Ashura in Arabic countries, Hanukkah, and Dongzhi, the winter solstice celebrated in China, Korea, and Japan. Thanks to Arielle Dedeyan in France for researching the many gifts from the European Union, Coco Xintong Lu in Beijing, and Aravinda Anantharaman who curated the selections from India, with special thanks to Janis Hashe for curating the Holiday Gifting 2020 issue.

The Winter Solstice marks the season’s turn toward longer, brighter days of spring. It is a moment in the depths of winter to reflect on the year past and make plans for the warmer days ahead. Here in the Canadian north, the sun is now visible for less than eight hours with 16 hours of dark. Beijing is further north than many assume. Everyone driving scooters there in winter shields themselves from the biting cold behind quilted blankets that fit over the handlebars and extend to the ankles. Dōngzhì translates as “the extreme of winter” is one of the most important festivals of the year. It is the nadir of yang (warm energy). Unlike Chinese New Year where everyone is drawn to the streets by fireworks and dancing dragons, the Winter Solstice is a family gathering with a meal featuring dumplings (family recipe, of course) and tea. Dongzhi is the best time of the year to take tonic foods like red date (jujube) tea. Dark teas and Pu’er (tea broth) are favored along with “high baked” oolongs harvested in the spring and toasted several times over charcoal during the summer months. These rock teas are released in November in time for the festival.

Celebrations vary by region with the north favoring hot dumplings, mutton, and wonton. Legend has it that eating dumping was inspired by Han Dynasty physician Zhang Zhongjing, he cooked up ear-shaped jiao (dumpling ears) to prevents frostbite of the ears.

In the south of China, tangyuan is favored, this sticky sweet colorful dessert consists of rice flour made into balls that are boiled or deep-fried. The rice balls are filled with black sesame, ground-up nuts, or red bean paste, with savory spices. The rice balls are served in a soup bowl of ginger syrup. Dumplings and rice balls each symbolize family cohesion. 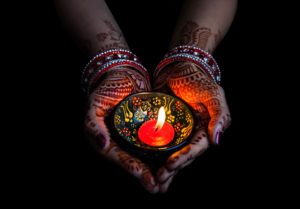 Like the Christmas lights that continue bringing cheer into the long nights of January, Diwali, the festival of lights, continues to brighten the holidays in India and East Asia. The holiday is shared by Hindus, Jains, and Sikhs. Newar Buddhists celebrate Diwali as the return of King Rama to the Ayodhya after defeating Ravana by lighting row-on-row of clay lamps. In Southern India, the festival celebrates the day that Lord Krishna defeated the monstrous demon Narakasura. Diwali symbolizes the spiritual “victory of light over darkness, good over evil, and knowledge over ignorance.”

In late November street-side cafes known as dhabas are thronged with crowds demanding cup after cup of masala (spiced) chai (tea). The best chai starts with high-quality robust black tea, usually from Assam but Darjeeling tea is also popular. Chai is brewed in an open pan with a mixture of spices, ground cardamom seeds, star anise, cinnamon, black peppercorns, and ginger, strained into caldrons, and ladled into cups.  During the festival, Indian style shortbread is popular (Nana Katai). The shortbread is flavored with chai and sometimes garnished with almond and saffron strands. Chai-spiced coconut laddoos are another favorite. Laddoos are made with chickpea flour, semolina, or almond flour and sweetened with sugar. Tea finds its way into many dishes including a Jasmine tea Phirni (think tea latte). The holiday is celebrated for five days ending in mid-November but the massive and magnificent lighting displays linger and gift-giving continues through the season.