The intense, curious, and inventive mind of Allen Han has been focused for years on industrial design. The 45-year-old is best known for his role in creating the Xbox 360 and the Kindle Fire.

But, since 2014, this designing mind has been turned to a new venture: creating the Teforia system, perhaps the ultimate in customized tea brewing. The two worlds—high tech and tea—might seem at first glance to be in different universes. But Han’s journey shows the connection.

Han was born in Taiwan, emigrating to the United States with his parents at age 11. His Taiwan memories include being dropped off at his grandparents’ house after summer school and the flowery fragrance of bao zhong tea wafting through the rooms. (Also known as pouchong, this tea is classed between green tea and oolong and is renowned for its scent.)

Tea, however, was not front of mind in his American life. Han graduated from the University of Washington in 1995 with both a BA and a BS and went immediately to work for Microsoft, where he stayed for nine years. It was here that his success in contributing to the Xbox 360 design ignited a career that carried him through stints at Real Networks, HTC, Element3, Amazon, and Nokia (where his official job title was Toy Maker/Innovation Director).

He was still at Nokia in 2012 when he paid a return visit to Taiwan. There, as he explains, “The scent of the tea brought back so many memories. Aromas are so powerful in evoking memory… I was transported back to my childhood.”

This revelation combined with another he’d had while ordering coffee in a hip coffee house. Although the friend he was with was peppered with all sorts of questions about which coffee he wanted and how he wanted it prepared, Han, who says that “99 percent of the time” he chooses tea over coffee, observed his teabag being tossed casually into a pot of boiling water. He realized that many of the world’s approximately 158 million daily tea drinkers were being shortchanged.

“Not only do you need to consider the flavor and texture of the type of tea, but also the two variables of temperature and time,” he says. “I feel it is shameful that people do not treat tea as respectfully as possible.”

Designing a ‘tea master’ for your kitchen

So, unsurprisingly, he began, by his own estimate, to spend every day for nine months attempting to make the ideal cup of tea. He experimented with classical tea-making methods, porcelain pots, and clay pots, and found he could radically change the flavor and mouthfeel depending on how the teas were prepared.

“I wanted to do something I felt passionate about,” Han says, and notes that the challenge of creating an “immersive experience” was not that different from working on the Xbox 360.

The idea of Teforia—the name is pronounced “Tay-foria” and is a combination of “Taiwan” and “euphoria”—emerged less as a concept for a machine and more as a concept for how to create a workable tea ritual for a modern household.

He wanted to make it possible for the person brewing tea to have all five senses engaged, as they would be in traditional brewing methods. The Teforia user sees the tea bubbling and hears chimes at certain points. “We could have made the process silent,” says Han, “but we wanted hearing it to be a part of it.” The molded carafe is designed to be cradled in the hands for warmth before pouring out the tea, and, of course, smell and taste are core elements.

Han returned to Asia and spoke with tea farmers and tea masters. “I approach them as a student of tea,” he says. “Some of the farmers have been growing tea for as many as 11 generations.” He asked his sources how they craft the perfect tea and how they suggest making the best cup of that tea, using the 5,000 years of tea history.

He contemplated the challenge of incorporating what he had learned from these experts and his own experimentation into the design that eventually became the Teforia. The product’s elegant components include an internet-connected infuser, an infusion globe and carafe, a water filter, and 15 SIPS (Selective Infusion Profile System) containing teas selected from partners Samovar Teas, Steven Smith Teamaker, and Mighty Tea. He also created the Teforia mobile app, with which users control up to seven variables in brewing the “perfect cup of tea” using their own loose teas. The app also allows users to share and store what they’ve found to be ideal combinations for their teas.

“I wanted it to be as simple as possible, but also a ritual,” Han says. He is also passionate about connecting the user with the teas used: How are they grown? Who grows them? What is the terroir that gives each tea its particular qualities? “We were creating a platform to understand tea from an elemental state,” he says.

Remembering the ‘place of quiet’

Although Han is well aware that the purchasers of Teforia are likely to be mostly very busy, highly tech-savvy people, he believes he’s encouraging a time of reflection. “Even using the current standard way of making tea—those ten pulls on the tassel of the tea bag is a moment of quiet from the chaos that surrounds you,” he says. Using Teforia, “Your thoughts go to another place. You can go as deep into the process as you want to.

“We don’t want to replace traditional methods [of brewing tea],” Han says. “We see Teforia as complementary to them.” In fact, he describes an ideal world in which Teforia acts as a “gateway” to other tea experiences and knowledge of teas. “We are tea lovers,” he says, simply. “We want to help educate—and continue to be educated as well.”

by RUWASEY TEAS - 2 days ago

by RUWASEY TEAS - 2 days ago 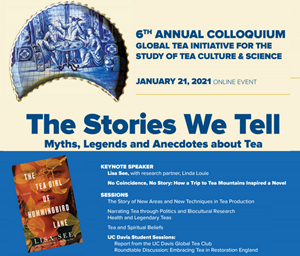 Glowing Skin – The Effects of Silver Needle on Skin Health