Straight out of university with a masters in English, I found myself at age 22 up in the High Ranges of South India on the Panniar Tea Estate. It was 1975. I was dispatched there by the Malayalam Plantations Agents in coastal Cochin, 130 kilometers west.  Born and with my entire formative years lived in Shimla where the only agricultural produce was apples, working in tea as a career tea planter had never ever crossed my mind.  Providence and a long story (for another day) of how I found myself 3,000 kilometers south from Himachal Pradesh.  Having been sent for an extension interview to a rubber estate near Trishur (Mooply), the first tea bush I ever touched was only after I arrived on Panniar. Never for a moment did I realize at the time my entire life would revolve around this innocuous plant. Now 45 years later that love affair continues — and thankfully so!

On my first day at work as an S.D. (Sinna Dorrai – Small Boss) my P.D. (Periya Dorrai – Big Boss) Mr. Abid Khan told me that for the first three or four months I was not to be given a motorcycle and that I should walk the estate with the conductor. I was then duly ‘handed over’ to Mr. Balia.  A most imposing figure replete with a pith helmet and a swagger stick, Mr. Balia (never just Balia) could WALK!  And so over the next four months after a very crisp ‘good morning sah’ and a tipping of the pith helmet, we walked and we walked and we walked and then we walked some more covering as much of the 320 hectares as we could.

Panniar being a good hour and a half drive from Munnar and the High Range Club I was totally dependent upon Abid and Shamim. Every time they headed that way, they would take me along for the evening.  Over the years I worked under him, Abid became a father figure.

At other times Abid would come past the muster on his bike and ask me (a daily ritual) ‘what are you doing this evening?’  Bereft of any kind of transport, there was not much that I could do and so evening after evening, straight from the muster we’d head up to Abid’s bungalow where the three of us (Abid, Shammim – his wife and I) would play badminton till it got dark. Then it was scrabble while listening to BBC on Abid’s transistor radio.  Abid was an infrequent drinker, and while a drink was offered to me every now and then, Shamim always made sure that I never went back to my bungalow hungry.  We followed this lovely ‘habit’ for all of four months till, having worn away three pairs of ‘Bata Hunter shoes’ (all that was available back then) trudging along behind Mr. Balia, I was finally made mobile with my Bullet. 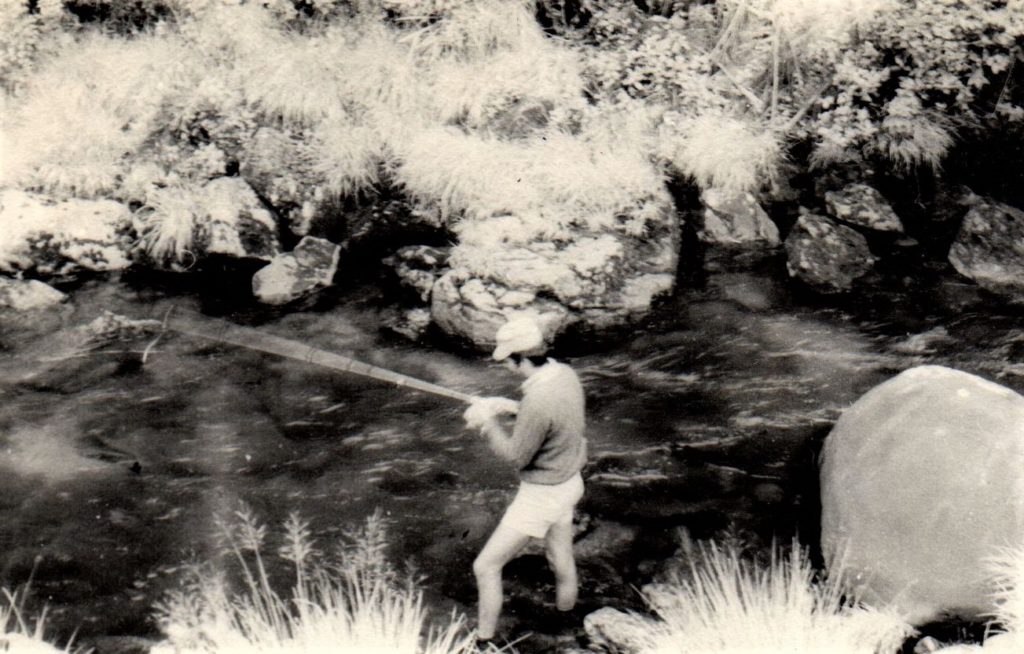 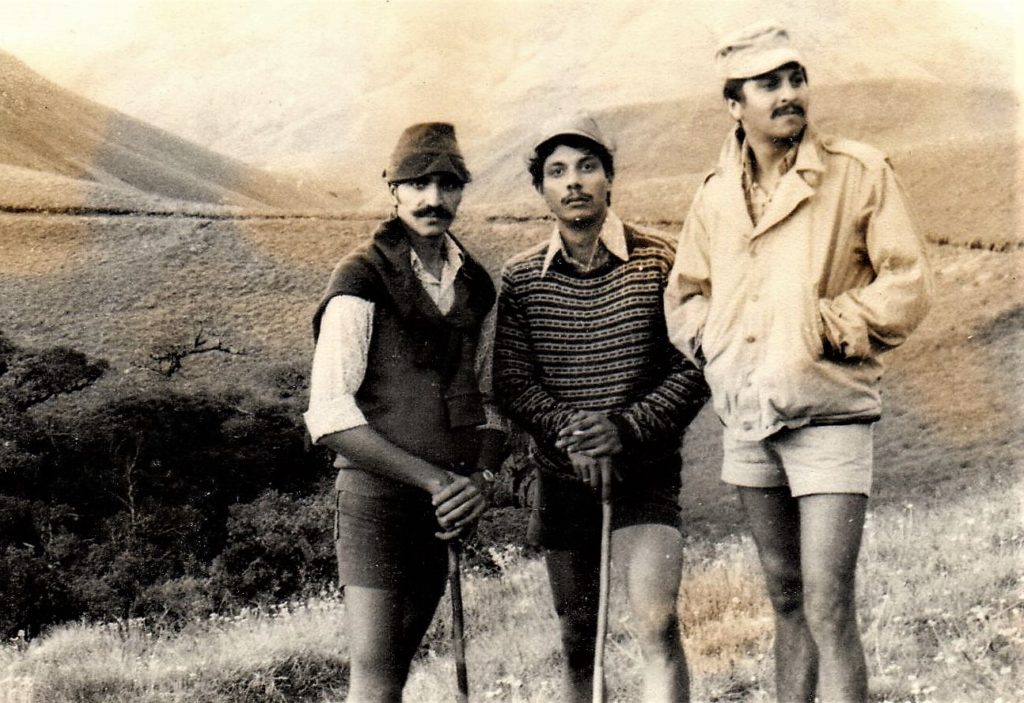 Panniar Trekking Up To ErvikulumTrekking to the summit of Eravikulam National Park with Vinay, left, Mohan, and Khanna. 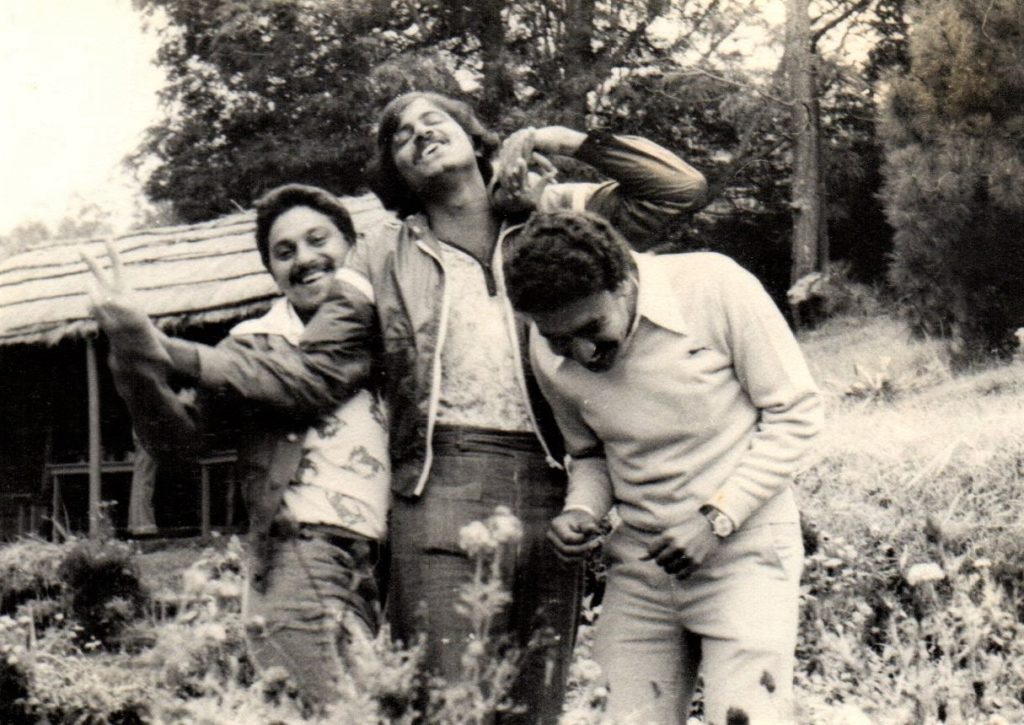 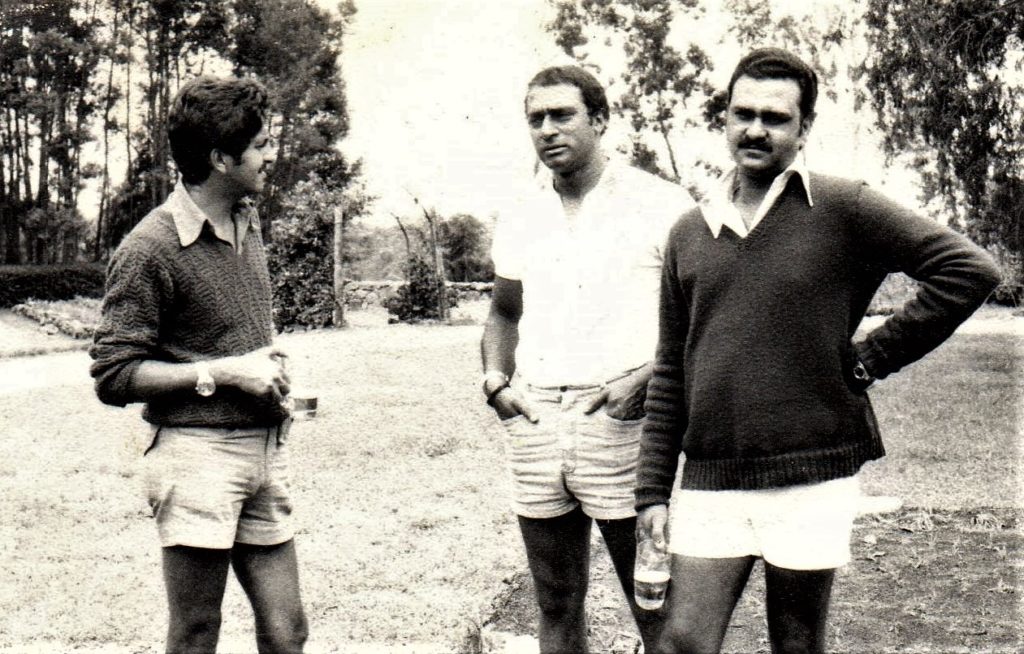 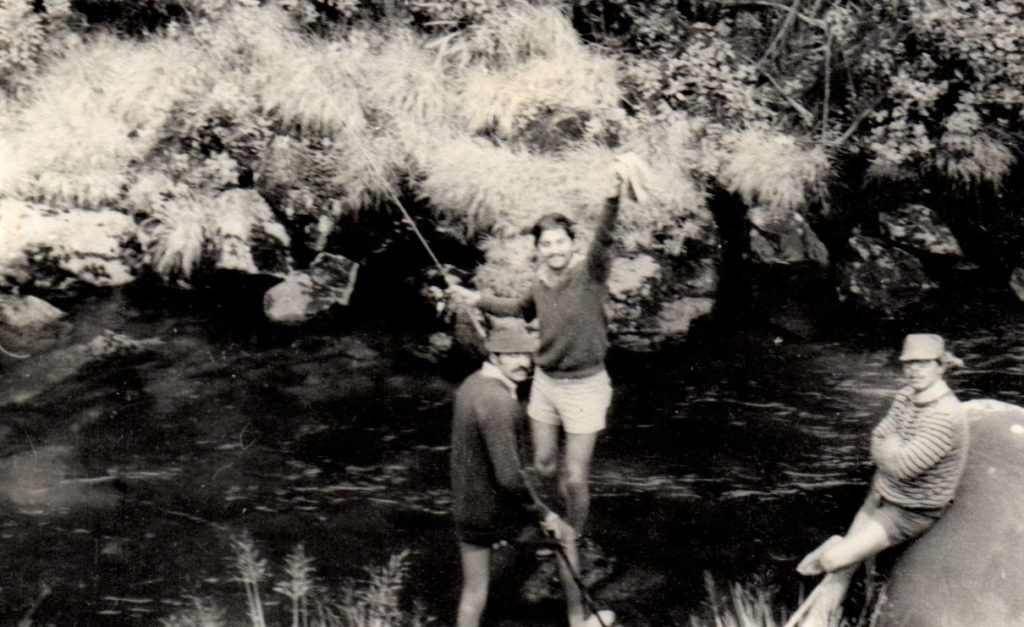 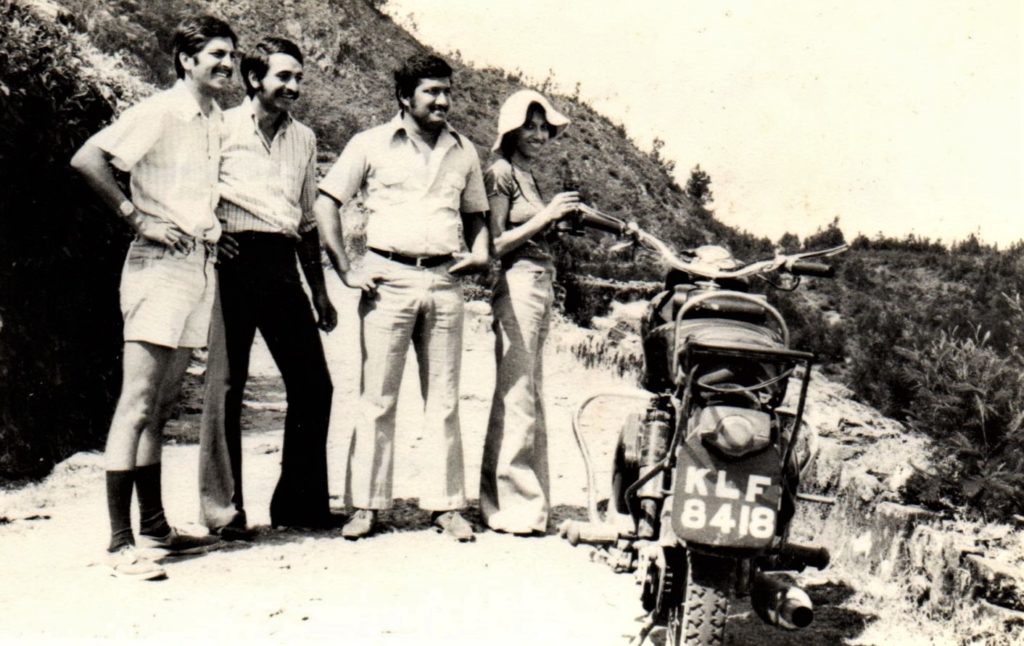 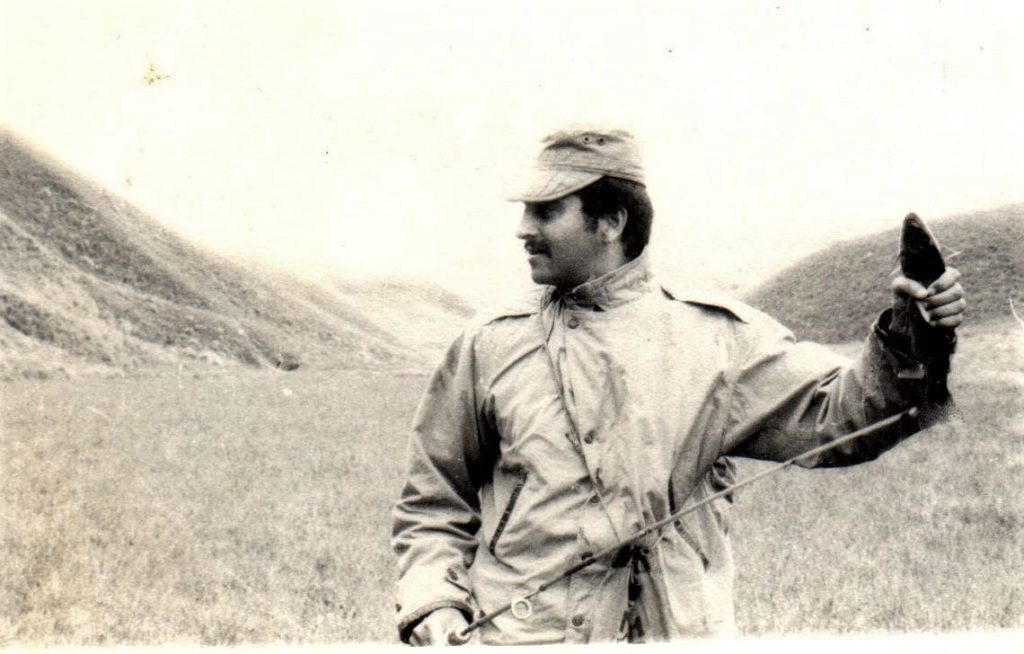 The Royal Enfield Bullet is a British overhead valve single cylinder four-stroke motorcycle with a throaty gurgle. Built in Chennai since 1955, the one which became my trusty steed for four years was an early 1960s vintage 350cc beauty which I fell in love with.  A love affair which lasts to this day, since even now my preferred mode of transport is my 2006 model Royal Enfield (Bullet).  The only thing having changed in the bike since then and now being a very useful self starter.

About three months into this routine in the Club, two of my senior colleagues from Surianalle Estate (another Malalayalm’s Estate in the High Ranges) casually asked me that in the absence of a bike, what was it that I did in the evenings.  Sharing my routine with them, Raghu and Appu asked me when I was planning to reciprocate and have Abid and Shamim over for a meal.  Which casual remark led to my getting down to buying a dinner set, courtesy the Company’s soft furnishing allowance and our group Doctor who was heading down to Cochin for a weekend.

As the proud owner of a spanking new Hitkari dinner set, adorned with tiny pink flowers, when Abid next came past I was pleased to ask, ‘Are you and Ma’am busy this evening?’ This reply led to my first grand dinner party.

The arrangements made, I headed off for the ‘Mr. Balia march’ of the day.  Walking back from my evening muster, just below my bungalow, I kept hearing a strange repetitive sound of ‘baak, baak, bakka…..’ which appeared to be emanating from under the bushes.  Peering down through the bush frames I saw my friend Kaliappan sitting on his haunches with a palm full of rice and intently ‘baaking’.  Having been unceremoniously hauled out from under the bushes he very sheepishly and with all 32 teeth flashing, informed me that just as he was about to knock off its head, our pièce de résistance had managed to wiggle out of his clutches and had disappeared through the pantry back door.

To say that I was upset would be an understatement.

With no money to buy another chicken and, in any case, being unlikely that Kaliappan would be able to muster up a replacement that late in the evening I resigned myself to serving a simple and likely inedible veggie affair.  Crestfallen and having showered, waiting for Shamim and Abid, I was thumbing through my weekly supply of newspapers (we received our ‘daily’ newspaper in one lot, once a week) when I felt a ‘presence’.  Peering over the top of my newspaper I saw our winged dinner, likely drawn in by the bungalow light, very proudly strutting across the red oxide floor.  In a stage whisper I called out to Kaliappan who, peeping out from the dining room and seeing the fellow, was out like a flash of lightening. He grabbed the hapless fellow by his neck.  Should anyone have seen that film, in his deft movement and sheer speed Kaliappan was the embodiment of the Bushman in ‘The Gods Must be Crazy’.

The next thing I heard was a squawk and by the time Shammim, Abid and I had done with our chit-chat, the poor escapee was in my new Hitkari serving dish on the center of the dining table swimming in curry! 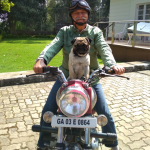 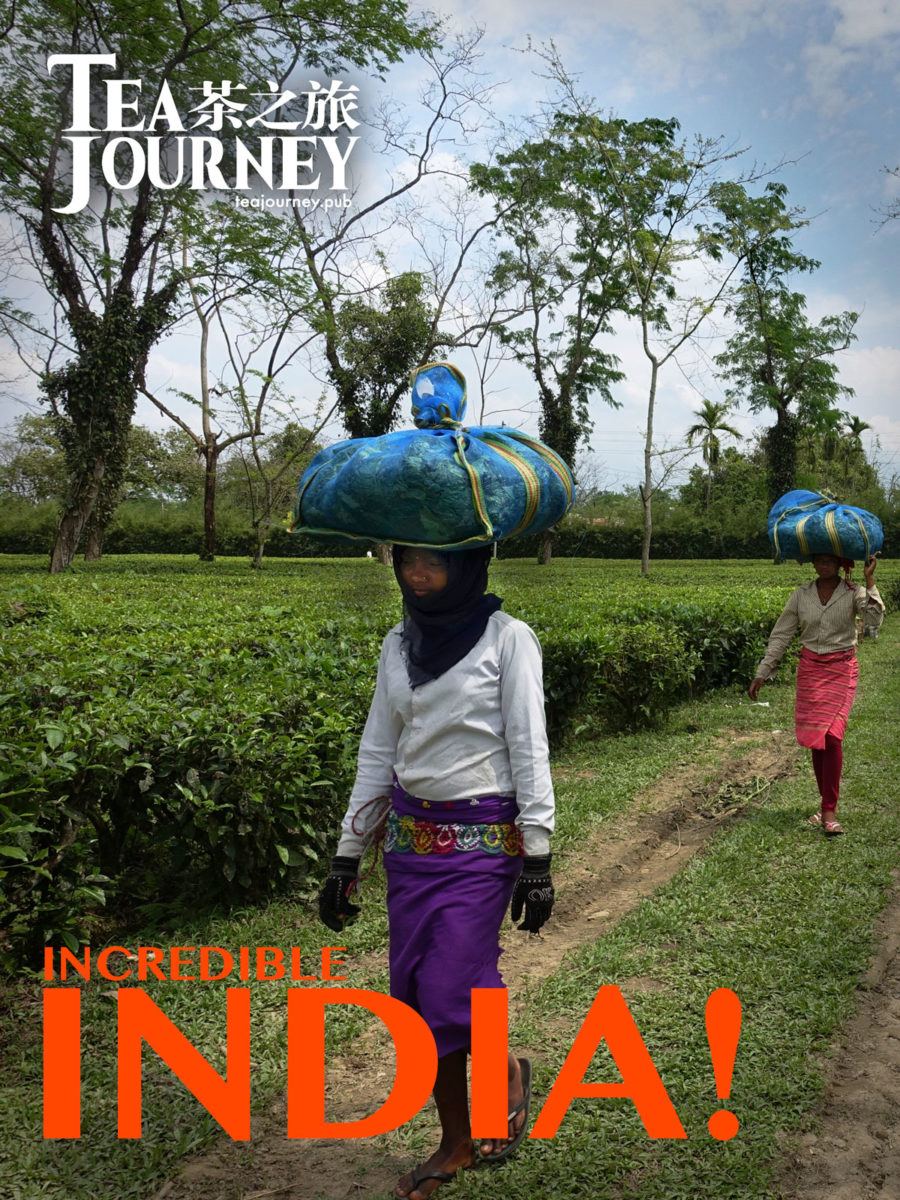