This recipe comes from the cookbook, Lobio: The Vegetarian Cooking of Georgia. The recipe, and Lobio itself, is a translation and adaptation, by Michael Denner, of the cookbook Lobio, Satsivi, Khachapuri or Georgia with Taste by Tinatin Mzhavanadze (Т. Мжаванадзе «Лобио, сациви, хачапури, или Грузия со вкусом»). The cookbook is full of delicious and nutritious interpretations of vegetables, beans, and grains. Find out more here. 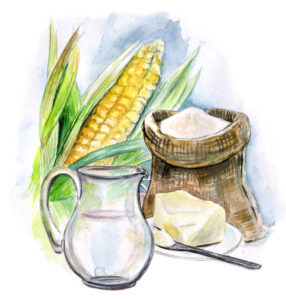 Michael Denner, the American Kitchen: I’m always struck by how little in the way of desserts are eaten in Georgia: There’s just no notable tradition of sweet baked goods, and more often than not, desserts are perceived as something foreign or introduced. In Georgia, it’s more typical to end the meal with fresh or dried fruit, nuts, honey, and sweet wine or chacha. Honestly, I don’t have much of a sweet tooth, but if I’m in Georgia for more than a few days, I end up visiting a Russian cafe to have a piece of cake…

These little, sweet balls are perfect with a cup of black tea from Georgia…

Georgian halva (ჰალვა), like halvas from all over the world, is a dense, rich, sweet confection. The word is eventually Arabic (it means “something sweet”), likely imported in the middle of the nineteenth century into the Caucasus from Kumyk and Ottoman influence via Dagestan, which borders and overlaps Georgia. (Tina describes this as an Ajaran dish, which shares a border with Turkey. Like most foodways, there were probably multiple points of entry.) Sweet dishes in Georgia have distinct but vague associations with wakes and burial rituals, as Tina’s story suggest. What I like about this recipe is its distinctly Georgian use of cornmeal: I looked in all my reference books and searched the web, and found no other recipe for halva that’s made from cornmeal. If you wish (and I think you should!), you could do something not entirely authentic, but very Georgian: Substitute honey for the sugar syrup. Follow the recipe, and add a cup of sugar to the cornmeal. But instead of making the simple syrup, use a cup or so of honey instead of the syrup called for in the recipe… Cook the mixture until it thickens and no raw flavor remains. Halva makes a filling accompaniment to fresh fruit, like peaches or mangoes, and some fresh walnuts… a fitting end to a Georgian feast.

From the Georgian Kitchen: Fati woke up one morning and began preparing halva. She’d dreamt of her father, who complained that he was hungry, and, according to  Ajaran tradition, you can feed the dead with halva. Fati turned on the kettle with some water, and sieved some fine white cornmeal into a bowl. She melted the butter in a skillet over a low flame, poured the cornmeal into the skillet, and mixed the butter and cornmeal with a wooden spoon for a few minutes over low heat, until the mixture took on a light brown color. She poured half the sugar (one cup) into the skillet, and stirred the contents thoroughly, until she obtained an even consistency. In another saucepan, over medium heat, she mixed the remaining cup of sugar with a cup of boiling water, stirring the syrup until it was clear. She let the syrup rest a few minutes until it was just warm, and then added it, bit by bit, into the cornmeal and butter mix, until she again reached a consistent texture. The halva cooled in the skillet until Fati could roll it into perfect spheres, which she arranged neatly on a platter. She waited a couple hours until the halva had cooled and dried, and they were ready to be eaten.

This completely simple and unsophisticated dish has ritual significance: Even if you don’t believe in anything, the aroma of butter, sugar, and cornmeal seems able to reach a kindred soul and fill it with the memory of the living. 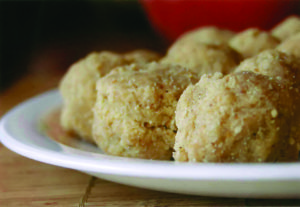 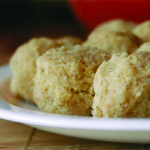 Georgian Halva
The method for this recipe, like many of the recipes from Lobio, is told rather than dictated. See above for an explanation of how Georgians make and consume halva.)
Ingredients
Servings: balls
Share this Recipe