The story of Temi Tea begins, not in 1965 when it was established but a few years earlier against a backdrop of political upheaval. 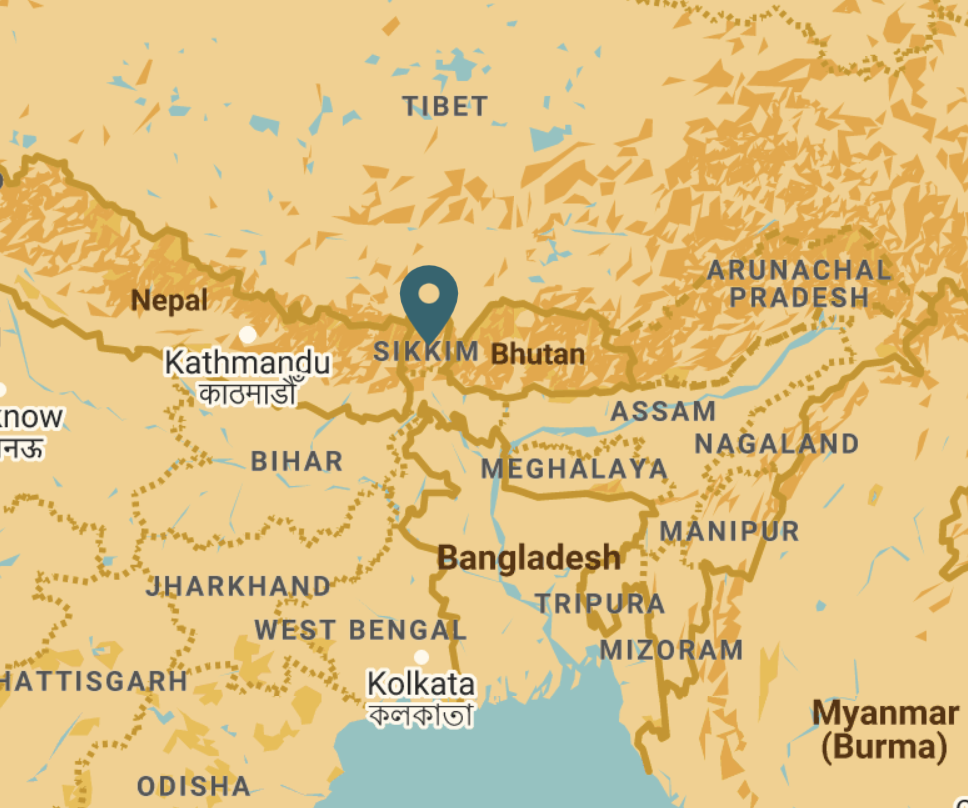 In 1951, following the Chinese invasion of Tibet, the Dalai Lama, Tibet’s foremost spiritual and political leader agreed to a peaceful occupation. After an uneasy decade came the revolt in 1959. Fearing for his life, he fled to India where he established an administration-in-exile. Across India, settlements came up for the thousands of Tibetans who followed him into exile, and continue to do so.

Sikkim shares more than geographical proximity with Tibet. The state religion is Tibetan Buddhism. The then king of Sikkim, the Choegyal, Palden Dhondup Namgyal, himself practiced Tibetan Buddhism. He was also a bhutia, a term that indicates Tibetan ancestry. He was keen to help the Tibetan exiles. Tea was already a thriving industry in neighboring Darjeeling, and it must have seemed like a good idea to borrow that as a source of livelihood. In 1969, Sikkim’s first tea garden came up, in Ravangla, planted with chinary and clonal saplings obtained from Darjeeling.

Unfortunately, the garden didn’t thrive. Tibetans are nomads and unfamiliar with agricultural practices, and certainly tea cultivation. The clonal bushes didn’t take to the soil.

A Legacy Worth Remembering

The story goes that Choegyal’s son asked his friend, Teddy Young, a planter from Darjeeling, for assistance. An Englishman born and raised in Darjeeling, Young, now famous as the “last of the Sahibs”, spent a lifetime devoted to tea. He agreed to help.

In 1973, Young and his mother – the daughter of a British planter who was born in the famed Makaibari estate – left for mountainous Sikkim, 30 miles north of Darjeeling, not an easy journey in a region that rises from an altitude of 920 feet to 28,169 feet from south to north. The site for the tea garden was shifted from Ravangla to the current location, Temi, and work began. By 1975, Sikkim, like other princely states in India, ceased to be a monarchy and was integrated into the Indian republic as her 22nd state.

In 1977, Temi produced its first batch of tea. Less than 100 kgs were produced. The tea was packed in yellow boxes and used by the chief minister as gifts from the state. Indeed, Temi’s teas were popular as “gift tea” because that was the only mode of distribution.

Young managed the 440-acre garden until 1982 when he returned to Darjeeling. In the decades that followed, Temi remained a government-run garden, producing tea that was well regarded but limited in distribution.

Taking Temi to the world

Sikkim is unlike the rest of India. The literacy rate is 98% and poverty under 8%. Electrical power is inexpensive and plentiful. Pesticides are banned throughout the state. Plastic bags were outlawed in 1998. The 610,577 citizens receive free rice from the government to ensure food security and may soon to enjoy universal basic income. In 2016, the entire state of Sikkim was declared organic. Farmers are no longer allowed to use synthetic fertilizer. Interestingly Temi was already certified 100% organic in 2008.

While that’s remarkable in its own right, perhaps Temi’s more significant achievement is in how it has emerged as a brand of its own – not as Darjeeling’s cousin or a ‘Himalayan’ tea but as a proudly Sikkim orthodox tea. In 2015, three years after Teddy Young passed away in Darjeeling, Temi’s teas first entered the global markets. The brand found takers among tea connoisseurs, especially those who enjoyed Darjeeling style tea. Here was a tea that resembled Darjeeling, but stood out as a confident tea of its own, as Young had hoped it would be.

In 2017, Mrinalini Srivastava from the Indian Police cadre was posted to Temi as managing director. The government position is filled in rotation every three years by the Indian Civil Services. One of the first things Srivastava did was to strengthen the Temi brand. Srivastava says, “Temi was easy to position. It’s a single estate tea, one of the first organic gardens in the country.” Temi is also synonymous with Sikkim, being the oldest garden here, and wholly state-owned. Her challenge was in creating a brand story for Temi, one that would be consistently communicated. “The storyline changed often,” she says.

She set out to articulate Temi’s brand story, bring back its rich legacy, and create a strong visual identity. Yellow was the color chosen by the Choegyal for the Temi packaging, and it connects deeply with Tibetan Buddhism. It’s thought to be the color closest to daylight, symbolizing humility. The color yellow had to stay, but Srivastava standardized the shade and created a strikingly vibrant range. The most premium of the collection comes in a sophisticated black packaging with a touch of the “Temi yellow”, with green and yellow for a green tea, and all-yellow packaging for the broken tea grade.

Production has increased since its early days, with current volume at 85-90 metric tons. Srivastava says it’s no longer solely a “gift tea”. “We realized that we were not getting the right price at auction, and

disengaged partially in 2017. It’s important for any tea garden to get into the retail market, to establish a brand, to set prices, to experiment, to promote their tea, and to earn better margins.”

Temi has upped its production to 130,000 boxes per year with 25 metric tons in retail sales. “We will explore public auctions, private auctions, exports, and retail market,” says Srivastava, elaborating on the garden’s distribution plan. Clearly, retail is set to become a key distribution mode, with at least 50% of the production to be directed for sales here.

A well-defined tea tourism program further strengthens Brand Temi. The burra bungalow or the manager’s bungalow has been spruced up and is an attractive tourist option, offering visitors a slice of tea life, with its fantastic views of the Mt. Kanchendzonga.

In 2017, Srivastava launched the annual Autumn Festival. In its third year now, it’s typically scheduled towards the end of the last tea harvest of the year, one of the prettiest seasons when cherry blossoms are in bloom in these parts. “There’s more to Temi than tea” reads the tag line. And it’s a great way to showcase Sikkim’s natural beauty, vibrant culture and also support local businesses. Temi, like Darjeeling and Assam, closes for the winter in November. No plucking takes place until spring. This makes the festival especially significant as it offers added revenue from tourists. It is also a fantastic marketing opportunity for Temi’s tea.

Temi was never intended to be a for-profit enterprise but Srivastava has set out to make it a sustainable operation. “We went through a transition period when attrition was high. But we have been working on inculcating professionalism and pride in our workers.” In the last three years, Srivastava has introduced a bamboo unit. Bamboo is native to the northeast and one that can coexist with tea. It offers diversification by providing an opportunity to employ staff who are closer to retirement and can no longer work in tea plucking. It’s also a lucrative unit, bringing in welcome revenue Srivastava talks about the shared productivity concept and about introducing the idea that the workers are not “labor” but contributing to the economy. And more importantly, she talks about how her work in the last three years should take Temi towards profitability, or at least break-even point.

Time your visit to coincide with the Autumn Festival. Besides offering a tea experience in the gardens and factory, the festival also offers plenty of adventure sports, music performances and a peek into the former kingdom’s unique culture. Tourism is a major source of revenue in Sikkim, with more than 2.5 million visitors annually. Book early if you’d like to stay at the Burra Bungalow“. The closest airport is Bagdogra, which also connects to Darjeeling.

Brand building takes time and Srivastava knows that the work has only just begun. Her successor will have to take what has been set in motion and build it towards greater sustainability.

The lesson from Temi is plenty: that a tea garden can support an entire community and not be an exploitative one; that creating a brand, while being one for the long haul, has definite advantages that one can no longer ignore; and that tea gardens must explore all options available to them to generate revenue. At a time when estates are struggling between high costs and low farmgate prices, this is significant. The good news is that customers are keener than ever before to know where their produce is coming from, and the story it carries. And that’s what Temi has nailed. Sure, it has protected and sustained its legacy. But it’s also made this legacy a part of its brand story, one that complements its topnotch tea. Together, they give Temi’s customers a strong reason to return.